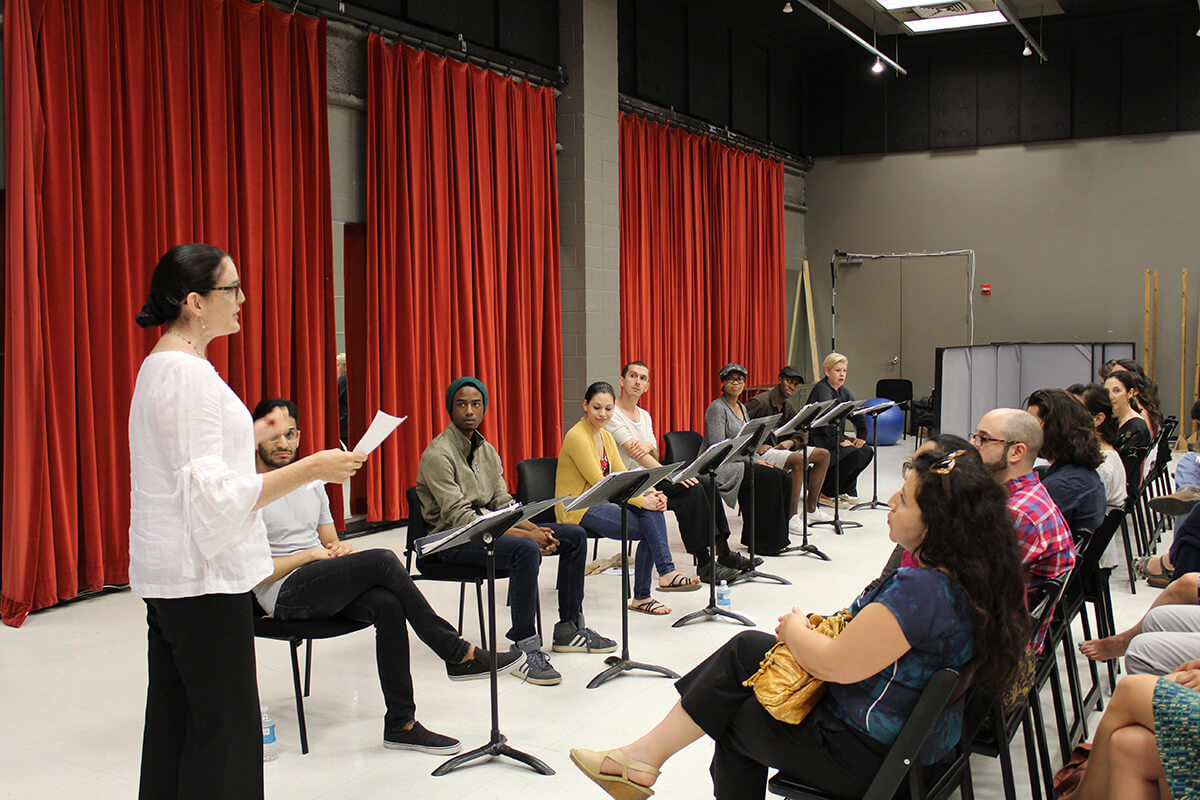 Conceived by Anne García-Romero, an associate professor in Notre Dame’s Department of Film, Television, and Theatre, this weeklong workshop in Chicago brings together 14 writers from across the country to work intensely with award-winning playwright and Fornés protégé Migdalia Cruz. Cruz guides writers through seven days of workshops in Fornés’ method writing.

“It’s designed to interrupt what’s comfortable for you as a writer,” said Lucas Garcia ’14, former Fornés Playwriting Workshop attendee and current workshop assistant. “It’s about getting off track, it’s about getting out of the groove that you’ve carved for yourself, about becoming uncomfortable with your own work again and opening yourself up to the possibility of randomness and bolts of lightning.”

The week’s workshops and writing exercises culminate in the writing of five-minute scenes inspired from participants’ workshop experiences. A director, actors, and a producer are hired to present a reading of each scene at the end of the week to an audience. This year's reading was presented at the Tony-Award winning Goodman Theatre in Chicago, directed by Cheryl Lynn Bruce.

Studying with Cruz is “really emotional and very spiritual. She’s so finely attuned to everyone in the room and writing with her is extremely special,” Garcia said. “We’re receiving firsthand training that an entire generation of U.S. playwrights received and it’s incredible — at the same time that we are receiving these skills and receiving strategies and going through this process we are unearthing and affirming Fornés’ legacy as an educator, as an artist, and as an immigrant person.”

“We all know it’s a very complex community, the Latinx community in the U.S. U.S. Latinx Theatre artists are vastly diverse culturally, aesthetically, so we felt like that was not known in the wider American theatre and so we wanted to help change the narrative so that people could understand in the 21st century how complex and rich and diverse the Latinx theatre community is and what we have to offer,” Garcia-Romero said.

“Fornés’ legacy is that she is a playwright, a director, and a teacher. She transformed, specifically, Latinx theatre because she trained a generation of Latinx theatre makers including Nilo Cruz, Pulitzer Prize winner for drama; Luis Alfaro, one of the most produced Latinx playwrights in the country; and Eduardo Machado, an influential playwright and teacher in New York,” García-Romero said. “Her legacy is her students, her legacy is her incredible method of writing plays that is really innovative and groundbreaking – I don’t believe this method is being taught in a workshop like this anywhere else in the country or maybe even the world.”

The Institute for Latino Studies is honored to continue to be the key sponsor for this annual workshop as it works to continue the tradition of Fornés and promotes Latinx leaders in the theatre community.

“ILS is pleased to support the Fornés Workshop for the third consecutive year under the leadership of Anne García-Romero, the nation’s foremost scholar of this unique Latinx style of play writing and theatrical production,” said ILS Director Luis Fraga. “There is no doubt in my mind that it is through the creative arts that the energy, hopes, aspirations, and power of Latinx communities will be celebrated and preserved for present and future generations.”

The powerful impact of this workshop has already been demonstrated through the work of Lucas Garcia, who currently works in Chicago as a writer, dramaturg, playwright, and poet. Garcia also volunteers at the Alliance of Latinx Theatre Artists (ALTA) an organization that seeks to provide professional development, community, and advocacy through volunteering and providing member services to theatre artists Latinx Theatre Artists, specifically in the Chicagoland area.

“The workshop is very affecting on a personal level and on an artistic level,” Garcia said. “On an artistic level certainly, but on a personal level as well because it’s a sort of fearlessness and that fearlessness is very generative as an artist but it’s also very important as a person and for me. That is why this workshop is so special because Fornés’ legacy is, in my perspective, a way of living as an artist and not just making art.”