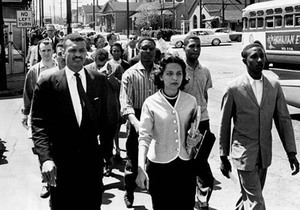 Diane Nash, center, and others march to City Hall in Nashville, Tenn., in 1960.

American civil rights activist Diane Nash — who led the first successful campaign to desegregate lunch counters, was a part of the Selma voting rights movement and co-founded the Student Nonviolent Coordinating Committee — shared her personal experiences with racism and her integral efforts in the civil rights movement on Tuesday, March 7.

Nash was first exposed to the full extent of overt, state-sponsored racial segregation as a college student at Fisk University in Nashville, Tennessee, she said. During the fall of 1959, Nash said she was shocked into the reality of Jim Crow laws in the south. Originally from the south side of Chicago, she said she was always aware segregation existed but did not know its severity until she moved to the south.

“When I obeyed segregation rules, it felt like I was agreeing that I was too inferior to go through front doors or [to] restaurants, swimming pools and other public accommodations,” Nash said.

In downtown Nashville, African Americans could only purchase food in restaurants on a take-out basis, she said. When she walked down the streets during lunchtime, African Americans lined the curbs and alleys, eating the lunches they brought from home or bought as take-out, she added.

Nash said she was dissatisfied with the word “nonviolence” as it pertains to the civil rights movements of the 1960s.

Nash’s dissatisfaction led her to coin the phrase “agapic energy,” meaning energy produced by a love for humankind. Inspired by Mohandas Gandhi’s way of observing love energy, as well as the Greek word “agape” — which means brotherly love or a love of humankind — Nash said agapic energy was an improvement on the term nonviolence.

“Agapic energy is not passive — it’s active,” she said. “Users are not pacifists — we are activists.”

Originally published by The Observer at ndsmcobserver.com on March 8, 2017.