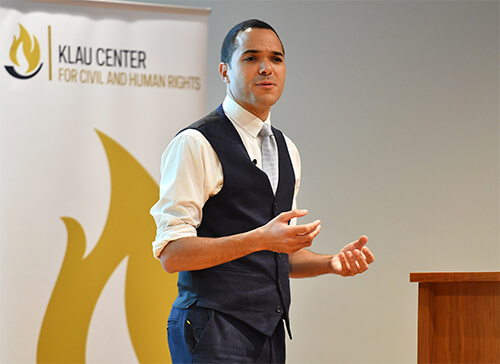 Alexander McLean, founder of the African Prisons Project, visited the University of Notre Dame on September 6, 2018, to deliver the inaugural lecture for the newly endowed Klau Center for Civil and Human Rights. McLean spoke in the Hesburgh Center auditorium, describing the work of his organization to bring justice to the most vulnerable in Africa.

Acknowledging at the start the difficulties faced by the U.S. prison system, McLean appealed to the audience to see his stories of the suffering of the disenfranchised as having a universal message. “I hope,“ he said, “we will be reminded that we have a shared humanity, regardless of our nationality or the language we speak or the circumstances in which we’re born. I believe that what’s happening in prisons in east Africa has something to speak into the situation in prisons in America….”

Addressing the concerns of those imprisoned in east Africa, McLean recalled his early attempts to improve the conditions of the incarcerated. Focusing on the establishment of libraries and clinics in the most impoverished prisons, then hiring and training staff, it soon became apparent that the problems were systemic rather than physical.

The questions soon began to turn on the fundamental problems of dignity and access to justice. “Why is that prisons are filled with poor people who don’t have connections, don’t have education, who’ve often got mental illness, or they’re vulnerable in other ways,” McLean asked. “In places where 80 or 90% of prisoners would never meet a lawyer, places where there are no juries, it didn’t seem that justice was guaranteed.” The approach adopted by the African Prisons Project became one of empowerment. Legal educations programs were established in which prisoners and prison staff study the law side by side, building not only a set of skills but also a sense of shared respect and trust.

Providing the means for the imprisoned to assume a measure of responsibility for their own futures, the project in turn produces advocates for justice that emerge from the ranks of those to whom justice has often been denied. As McLean explains, such an inclusive approach to social problems lies at the heart of the project. “We believe that for none of us does our past have to define our future,” he says. “We believe that we can all play a part in creating a more just society.”

Originally published by Kevin Fye at klau.nd.edu on September 18, 2018.