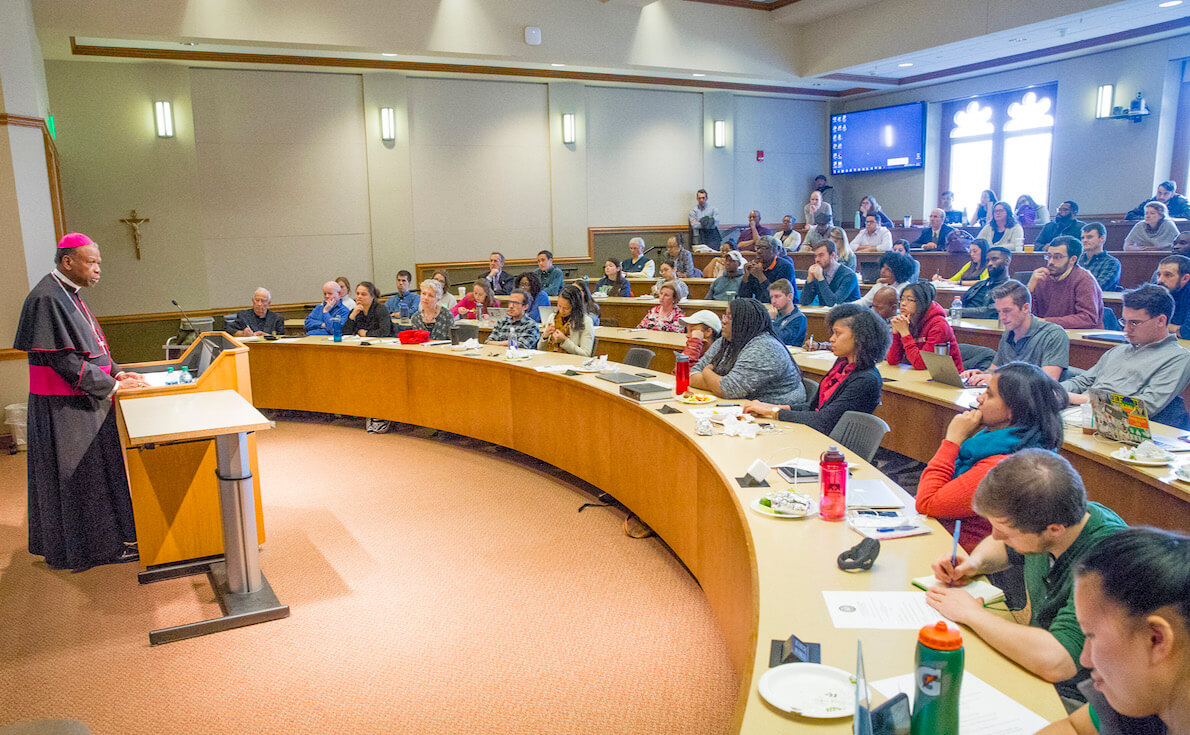 In the prologue of his Dean’s Lecture on Race, Law, and Society, “The Catholic Church and the Racial Divide in the United States,” the Most Reverend Edward K. Braxton, Ph.D., S.T.D., Bishop of Belleville, Illinois, asked a thought-provoking question: “What if?”

What if racial roles were reversed in the Catholic Church? What if you were a poor, marginalized white youth who entered a Catholic Church for the first time and saw all the images of God, Jesus, Mary, Joseph, the saints, and bodiless angels with Afro-centric features? How would you feel if all of the images of the Kingdom of Heaven looked like African-Americans and none of them looked white or like European-Americans? His “what if” questions prompted his listeners to wonder why it is that Catholic Church art in the racially diverse United States features almost always images of God and holy men and women with exclusively Euro-centric features. Would not diversity in religious art be more welcoming, more universal, and more “catholic”?

His address was a wide-ranging talk on the abiding racial divide in the United States and how everyone can and should do something to bridge that divide.

“This is not a simple topic,” he said to the packed room Wednesday in Eck Hall of Law. “Everyone has opinions about it, and all I can share with you is some early jottings to contribute to your thoughts and reflections, and ask you heed five important imperatives as you listen to my voice and when you go forth from this lecture. Listen! Learn! Think! Pray! Act!” He repeated these imperatives throughout the lecture.

The Bishop reminded his audience that in exactly two weeks the nation would mark the 50th anniversary of “the cruel, brutal murder” of the Rev. Dr. Martin Luther King Jr., who was only 39 years old. Bishop Braxton reflected on what the 89-year-old Dr. King would see in America, if he was still alive. He would see both progress and regression. He would take note of the presidency of Barack Obama, the country’s first biracial president. Dr. King, whom he called a latter-day Mahatma Gandhi, might lament that those who thought President Obama’s time in office was the beginning of a post-racial America were quite naïve. Braxton said that King would surely grieve over the deaths of so many young African-American men in violent conflicts with white law enforcement officers. He said surely Dr. King would be deeply distressed by the re-emergence of hate groups like the Ku Klux Klan, neo-Nazis, white supremacists, and violent conflicts over Confederate monuments. On a deeply personal note, the Bishop shared accounts of his own experiences of being confronted by white police when he was simply walking down a street as a young priest.

Dr. King would be pleased that the Catholic Church has acknowledged that it has been on the wrong side of history when it comes to the racial divide. Notre Dame students and faculty might be surprised to learn that Catholic bishops, like John Carroll of Baltimore, and religious communities have owned “enslaved free human beings” and that the first Catholic Chief Justice of the Supreme Court, Roger B. Taney, penned the odious 7-2 Dred Scott v. Sandford decision in 1857 as if he did not know the mandate of Jesus of Nazareth to love our neighbors as we love ourselves. This ruling argued that Dred Scott, his wife, Harriet, and all people of African descent were, before the law, property not persons, thus creating a dangerous flaw at the foundation of our democracy. 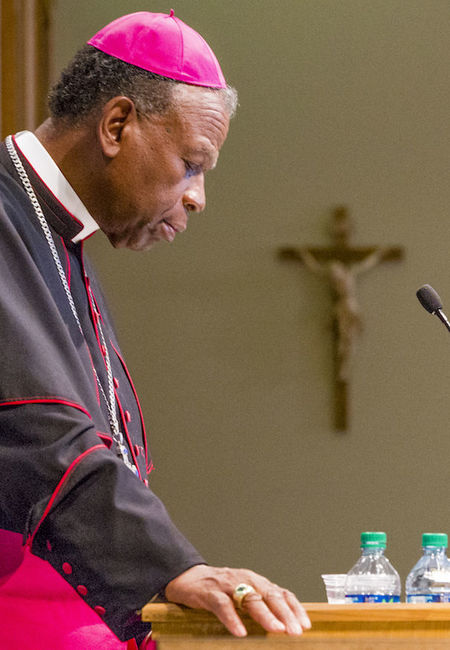 Bishop Braxton explained that Dr. King would not be surprised to learn that only 2.9 million of the nearly 70 million Catholics in the United States are African-Americans. Only about 250 of the 40,000 priests in this country are African-Americans. For many years, African-Americans were rejected by seminaries and convents and not allowed to become priests, brothers, or sisters. There are only eight active African-American bishops out of more than 260 bishops in this country. In recent years, Catholic institutions like the University of Notre Dame have made more aggressive efforts to overcome past racial biases and increase the diversity of the student body and faculty. However, he insisted that much more can and should be done if these institutions are to be credibly Catholic. He expressed great regret that the U.S. Bishops’ 1979 pastoral letter, “Brothers and Sisters to Us,” which condemned racial prejudice as a sin and a heresy enduring in our Church and our country, was ignored by many and is almost certainly unknown to most Notre Dame students.

Bishop Braxton argued that Dr. King would appreciate the Black Lives Matter movement while affirming, as a Christian, that “all lives matter.” He asked the students sitting in the clean, warm lecture hall after eating a good lunch to imagine a desperate, cold, starving, homeless family coming into the lecture hall asking for help.

“While our lives do matter, it is their lives that are in peril,” Bishop Braxton said. “It is their lives, in that moment, that desperately need our attention. It takes nothing away from the fact that our lives matter to recognize the absolute urgency of responding to this family because of their existential need. And, in many circumstances, the lives of People of Color are in peril and treated as if they do not matter.”

In what may have been the most challenging part of his lecture, the Bishop asked everyone to think about Thomas Kuhn’s concept of “paradigm shift” in “The Structure of Scientific Revolutions” and re-evaluate the common practice of referring to some American citizens as “minorities” and “minority groups.”

“Why are Americans whose families came from Norway or Ireland or Germany not called ‘minorities’? They are, in fact, a minority of the U.S. population. Why are these expressions used almost exclusively to apply to African-Americans and Hispanic-Americans, even in communities where they are the majority of the population?” Bishop Braxton asked. “You should read Matthew Fry Jacobson’s ‘Whiteness of a Different Color: European Immigrants and the Alchemy of Race’ to understand the origins of this use of ‘power language.’

“If you think about the true meaning of E Pluribus Unum – ‘from many, one’ – you will see the need to embrace a ‘paradigm shift’ like the shift from the Ptolemaic worldview to the Copernican worldview,” he continued. “No group of Americans should be called ‘minorities’ unless all groups of Americans are. ‘Minority’ language describes people not as who they are, but as who they are not, that is not white. In a similar way, I do not believe it is appropriate for Roman Catholics to refer to their sisters and brothers who are Lutherans, Methodists, Episcopalians, Baptists, and Presbyterians as ‘non-Catholics.’ When were you last called a ‘non- Presbyterian’?

“In truth, there are no ‘minority’ or ‘majority’ groups in this country because we are all American people from many different backgrounds, proud of our amazingly diverse heritages, with every right to expect, even to demand, that we be treated equally by law enforcement, by the courts, and in the public square, and yes, even in our churches,” he continued.

He ended his address by sharing with his attentive audience the words of St. Teresa of Calcutta. “In the face of this world’s challenges, everyone can do something. You can do something!” He then gave a list of specific suggestions of things students can do now to bridge the racial divide, saying, “If you decide to do nothing, you must come to terms with the words of the old Spiritual, “God gave Noah the rainbow sign. No more warnings; the fire next time!”

Bishop Braxton’s many writings on the Racial Divide can be downloaded from the website of the Diocese of Belleville at www.diobelle.org.