The diversity site is re-running this article, originally published by Notre Dame Magazine in September 2014, in honor of Black History Month. 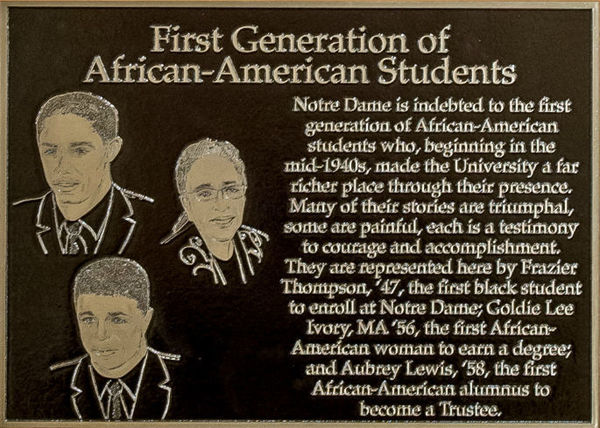 Frazier Thompson,Goldie Lee Ivory and Aubrey Lewis represent Notre Dame's first generation of African-American students on the University's Wall of Honor. The plaque was unveiled at an induction ceremony October 13, 2015.

Some stories need to be lived in order to be told truthfully, truly and fully.

But even an African-American student would be unable to tell the story of being black at Notre Dame because there is no single story, no singular experience, no one person who can speak for all who have come here from so many places, families and personal histories. It would take a book to explain. And one with many voices.

Now we have that book. Black Domers: Seventy Years at Notre Dame honors Frazier L. Thompson ’47, Notre Dame’s first black student, and all those who came after — many of them pioneers venturing into what for them seemed like foreign territory.

"Whether he realized it or not," Black Domers details, "Frazier Thompson was carrying the hopes of a whole people on his shoulders when he arrived on the Notre Dame campus in July 1944 as a member of the U.S. Navy's V-12 officer training program. His was the age of black breakthroughs, of barrier-breakers and 'firsts.'"

The book offers the first-person accounts of almost 70 African-American alumni, from the first blacks admitted in the late 1940s to some who graduated in May 2014. Thanks to co-editors Don Wycliff ’69 and David Krashna ’71, and to Jim Langford ’59, head of Corby Books, which published the collection in June, the 500 smooth-reading pages provide the shapings of that history, the pieces of a narrative that is both diverse and universal. Despite the individual perceptions and experiences, they all might agree and say change isn’t easy, and that Notre Dame is better for the richness of diversity grown over time.

We’ve gathered a sampling of stories, a representative mix of memories and impressions, and posted them here over the past few weeks. We appreciate the opportunity to share their words and extend the conversation to others in the family.

Originally published by Kerry Temple ’74 at magazine.nd.edu on September 01, 2014.

Thompson’s son, Frazier Thompson Jr., said he and several of his brothers had a memorable experience being greeted by so many people on campus in the days prior to the Wall of Honor induction ceremony.

“The first thing that comes to mind is humbled,” Thompson said. “It’s my first time here, so I had no idea of the impact my father had.” (Read the story.)