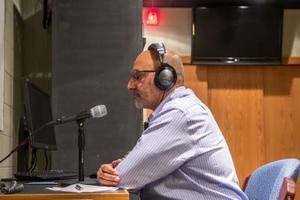 Moosa was teaching in the Department of Religious Studies at the University of Cape Town in 1997 when his research garnered increasing attention and he accepted an invitation to spend a semester in the Department of Religious Studies at Stanford University in 1998. He returned to Cape Town after his Stanford sojourn and soon became a target of urban terrorism in the city of his birth. Ebrahim Moosa—professor of Islamic Studies in the Kroc Institute for International Peace Studies and with an affiliation to the Department of History, and the first hire in the Keough School of Global Affairs— took a somewhat circuitous route to the University.

“When I returned to Cape Town, Building a world-class Islamic studies program a violent Muslim vigilante group had taken the city of Cape Town hostage,” Moosa said. “As a public intellectual, I felt an obligation to intervene and speak out against such lawless individuals. As a result, my house was firebombed.”

At the urging of his colleagues from Stanford, Moosa and his family quickly jumped on a plane and returned to Stanford.

“I thought I’d stay out of the heat of events back home for a year or two,” he said.

Sixteen years later, he finds himself at Notre Dame.

Following a three-year stint at Stanford, Moosa accepted a position at Duke University, where he taught in the Department of Religious Studies until 2014.

He began conversations that year with Scott Appleby, then Regan Director of Notre Dame’s Kroc Institute for International Peace Studies and now Marilyn Keough Dean of the University’s School of Global Affairs. Appleby invited Moosa to co-direct, along with him, Contending Modernities, the global research and education initiative examining the interaction among Catholic, Muslim and other religious and secular forces in the world. Appleby also asked Moosa to build a program in the study of Islam at Notre Dame.

"I decided Notre Dame was the place where one could begin to do an imaginative, world-class Islamic studies program. Notre Dame is a place where big ideas can be realized."

“I decided Notre Dame was the place where one could begin to do an imaginative, world-class Islamic studies program,” Moosa said. “Notre Dame is a place where big ideas can be realized. It wants to excel as a global university. The study of Islam and Muslims in North America and Europe as well as developing expertise about the Muslim world at large would add to Notre Dame’s leadership role in global affairs.”

Recently Moosa was interviewed by al-Jazeera Arabic, and he also participated in a panel discussion on the Diane Rehm show on NPR.

“It has been an extraordinary first year at Notre Dame, for which I am thankful and delighted,” he said.

“I work in a couple of different areas,” he said. “My research right now at Notre Dame is focused on how to think about questions of values, society and Islam. How does Islam deal with, say, democratic formation, citizenship, gender issues and questions of science? How does Islam as a religious tradition engage the various challenges modernity presents to it?”

Moosa is the author “What is a Madrasa?” which focuses on postsecondary-level religious institutions in the Indo-Pakistan heartlands. In his book, he explains how a madrasa is a valuable place of learning revered by many and an institution feared by many others, especially in a post- 9/11 world. He tries to explain why the demonization of madrasas is an incorrect perspective held by many in the West.

Drawing on his own years as a madrasa student in India, Moosa describes in detail the daily routine for teachers and students today. He shows how classical theological, legal and Quranic texts are taught, and he illuminates the history of ideas and politics behind the madrasa system.

Moosa also is the author of “Ghazali and the Poetics of Imagination,” winner of the American Academy of Religion’s Best First Book in the History of Religions (2006) and editor of the last manuscript of the late Professor Fazlur Rahman, “Revival and Reform in Islam: A Study of Islamic Fundamentalism.” In 2005 he was named Carnegie Scholar to pursue research on Islamic seminaries of South Asia.

Moosa’s personal and research experiences inform his vision of what an Islamic Studies program at Notre Dame could be.

“We will be competing with programs at Yale, Chicago, Duke and Harvard,” he said. “We need to find a competitive edge that will be different.

“We envision our program to involve multiple elements, including descriptive, normative and applied dimensions. We will sustain this triumvirate, or triangle, in tension to get the most out of such productive tensions. We intend to equip our students with a deep knowledge of what is going on in Islamic thought and society, and be in a position to formulate opinions as well as enter conversations about values across multiple faith traditions.”

True to Notre Dame’s vision, the Islamic studies program Moosa envisions will have ample opportunities for service learning and study abroad. And consistent with Notre Dame’s Catholic character, it will also be of service to the American Muslim community.

“The estimates vary, but being located in South Bend, Notre Dame, we are in close proximity to major concentrations of Muslim Americans in Chicago, Detroit and Indianapolis, from among the estimated 3 to 7 million American Muslims,” Moosa said. “We think our research will be of service to the American Muslim community, and we plan to optimize our location and assets such as the Santa Fe Building in Chicago to offer lectures and services that connect with the Muslim community.”

“I am a religious person, as a Muslim,” he said. “I’ve also felt comfortable in secular places and having grown up in difficult environments I have also learned how to navigate unfamiliar territories. So a religious environment like Notre Dame ought to be less of a challenge given the commonalities people of faith share.

“Catholicism is more deeply entrenched at Notre Dame than at any other U.S. environment I’ve been in, but I see this as an opportunity. Catholics and Muslims can potentially embark on series of meaningful conversations on common concerns. There are challenges both Catholics and Muslims face on gender issues, science, evolution and values. How do strong religious values survive in the midst of formidable social and political challenges?

“For many reasons, I feel that I’ve come to Notre Dame at the right time in my career.”

This story was originally published by NDWorks.