Members of different faith traditions can learn from each other through civil discourse that respects real differences, prominent Catholic and Muslim leaders said during a Nov. 20 interfaith dialogue at the University of Notre Dame.

The conversation, which featured Cardinal Blase J. Cupich, archbishop of Chicago, and Daoud Casewit, president of American Islamic College, continued a meaningful dialogue begun by a pair of pioneering religious figures some 800 years ago, Sultan al-Malik al-Kamil of Egypt and St. Francis of Assisi. The two met during the conflict of the Fifth Crusade. After each initially attempted to convert the other, they instead committed to listening and forging a friendship with each other.

The campus conversation also echoed the peaceful sentiments voiced in a recent joint declaration signed by Pope Francis and the Grand Imam of Al-Azhar, Ahmed el-Tayeb.

“Let us tonight take as our inspiration both the meeting of Francis and the Sultan, and the words of the Pope and the Grand Imam to gather as sisters and brothers engaged in respectful dialogue,” said University President Rev. John I. Jenkins, C.S.C. “Tonight’s event allows us to fulfill our mission of being a place of dialogue and learning, a Catholic institution where all sincerely held religious beliefs are respected, and a place where we seek ways to build peace and deepen understanding.” 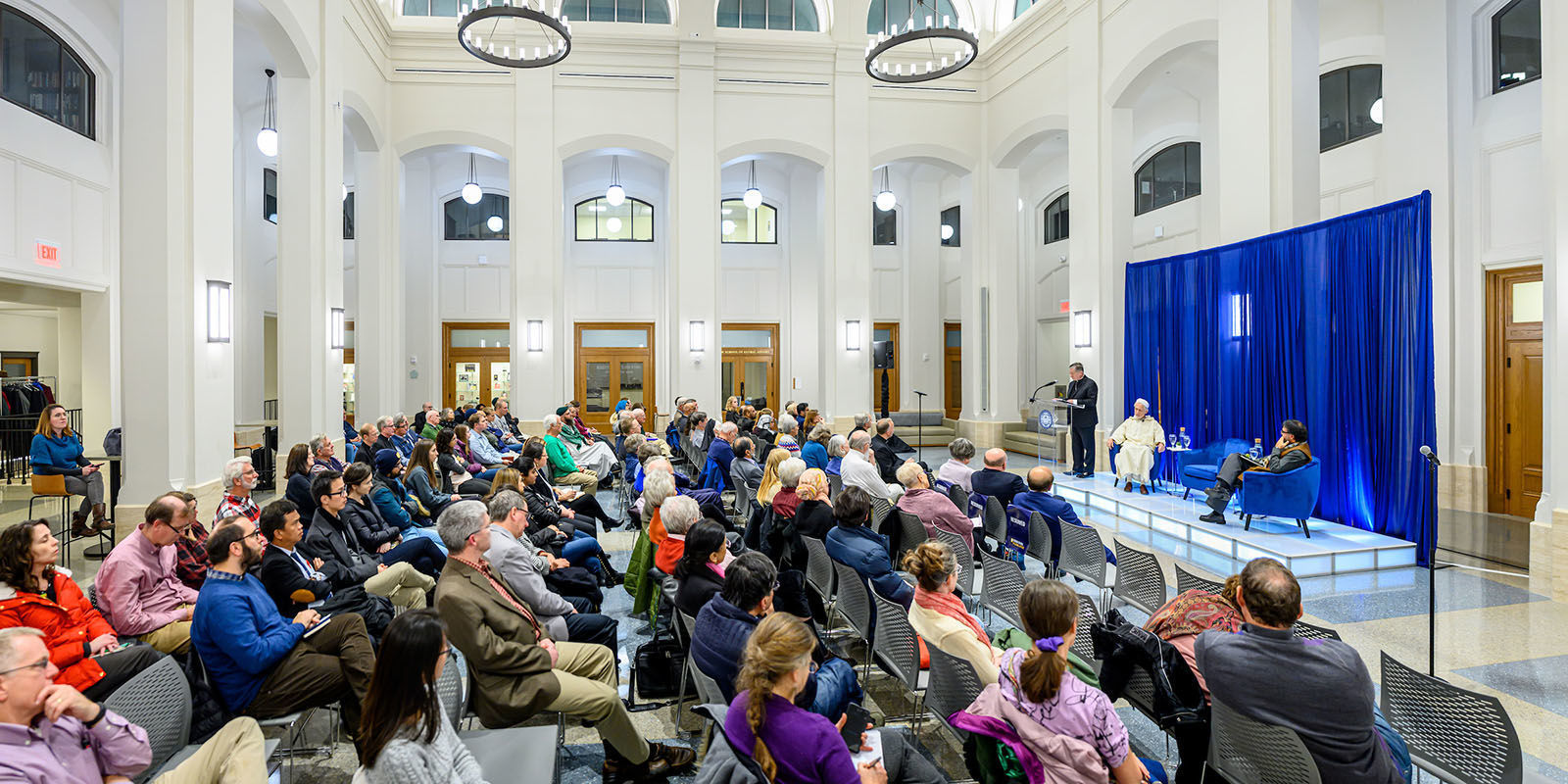 Cardinal Cupich said the conversation, and the dialogue it commemorated, came at an important time.

“We now live in an era when the idea of a clash of civilizations is shaping the understanding of international relations for many, particularly in terms of the encounter between Islam and the West in our own time,” he said. “The event we are remembering challenges that description instead with a message of hope.

“The message that I want you to take with you this evening is that dialogue should not simply aim at understanding,” Cardinal Cupich said. “Dialogue should foster relationships that are mutually enriching, especially as those encounters can help us come to a fuller understanding of our own traditions and inspire us to be faithful to them.”

Casewit said he frequently engages in interfaith collaboration in his role as president of American Islamic College and draws inspiration from Sultan al-Malik al-Kamil and St. Francis, “two deeply pious persons who showed respect for one another despite the differences of their religious identities,” and leaders who could see beauty, truth, wisdom and goodness in one another.

“While such an appreciation of the religious other has generally been the exception rather than the rule in the world of today, so prone to exclusivism and bigotry,” Casewit said, “there is a solid basis for it in the Quran.”

And in today’s environment, Casewit added, he has come to appreciate such an approach.

“Allow me to express my respect for and appreciation of the Catholic Church in this time of heightened Islamophobia, of possessing the moral compass under his Holiness, Pope Francis, to seek to humanize Muslims,” he said. 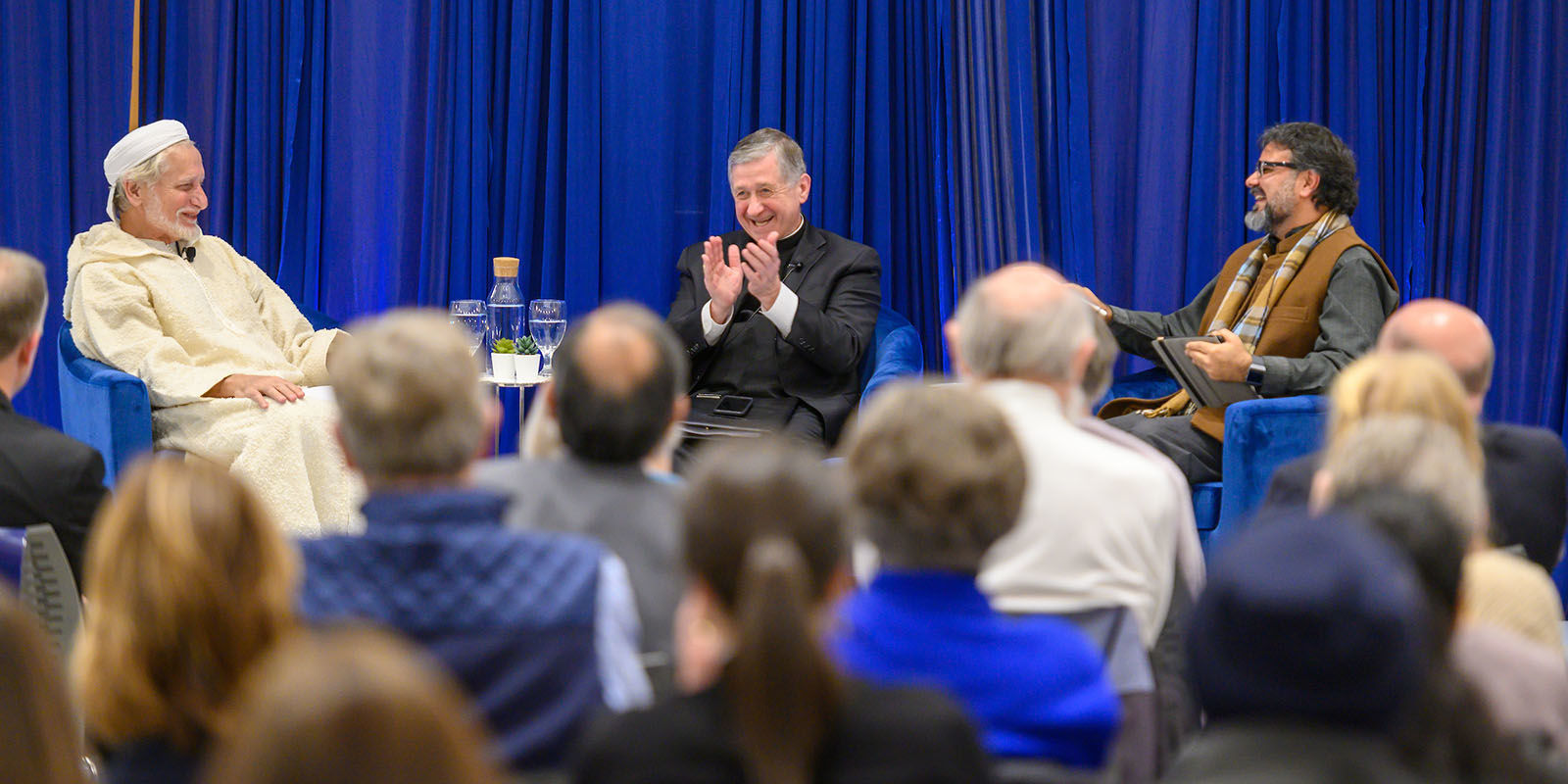 The Notre Dame conversation was hosted by the Ansari Institute for Global Engagement with Religion, which is part of Notre Dame’s Keough School of Global Affairs. Attendees included faith leaders from the greater South Bend area as well as Chicago.

“Our mission is to advance integral human development,” said Scott Appleby, the Marilyn Keough Dean of the Keough School of Global Affairs. “Although that concept comes from Catholic social teaching, it has great resonance and affinities with many of the values and principles of Islam, of other world religions, and indeed of many secular wisdom traditions in its emphasis on human dignity as the center of our efforts to advance human flourishing.”

The evening’s conversation was moderated by Mahan Mirza, the Ansari Institute’s executive director. Mirza talked with Cupich and Casewit about their own experiences of interfaith dialogue and the important role it plays in shaping a better world. He said the conversation was a helpful reality check at a time when fast-moving media cycles emphasize division and conflict.

“I want us all to pause for a brief moment to think about what’s happening here,” Mirza said. “We have in our midst leaders and practitioners from many of the world’s diverse faith traditions. With all the tensions and conflicts that exist in the world today, this is good.

“Reading the daily headlines, listening to round-the-clock pundits and media firebrands, or hanging out on social media networks that speak to conspiracies and reinforce prejudices, many of us tend to forget just how much good there is all around us every day.”

Originally published by Josh Stowe at ansari.nd.edu on Nov. 22.