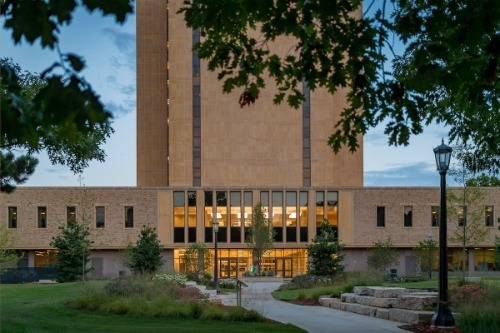 Historical documents about African-American Catholic priests, sisters, brothers, deacons, seminarians and laypeople will be preserved in the Hesburgh Library's archives and will be available for study.

A delegation of black Catholic priests paid a visit to the University of Notre Dame's Theodore Hesburgh Library in South Bend to entrust the archives there with historical documents about African-American Catholic priests, sisters, brothers, deacons, seminarians and laypeople.

The group visited the archives Oct. 24 in advance of Black Catholic History Month in November. The observance was established in 1990 by the National Black Catholic Clergy Caucus.

Members of the delegation Father Kenneth Taylor, a priest of the Indianapolis Archdiocese, who is president of National Black Catholic Clergy Caucus; Precious Blood Father Clarence Williams, caucus vice president and archivist; Father Theodore Parker, a priest of the Archdiocese of Detroit; and Deacon Melvin Tardy, an academic adviser at Notre Dame.

The materials they delivered will be preserved in the library's archives and be available for study.

The three priests were nostalgic about bringing the documentation to Notre Dame because of their personal histories with the university.

"It is hard to believe that we were here as seminarians in 1970, and began the National Black Catholic Seminarians Association. And now we return almost 50 years later as priests. Things have come full circle," said Father Parker. He had served on the coordinating committee of the seminarians association.