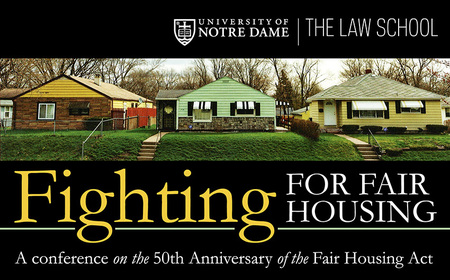 Notre Dame Law School is recognizing the anniversary by hosting a conference to look back at why the Fair Housing Act was needed, what the law has accomplished, and the challenges that remain in the fight for equal access to opportunity in the United States.

Fighting for Fair Housing kicks off Thursday, April 19, with an opening reception at the Indiana University South Bend Civil Rights Heritage Center and continues on Friday, April 20, in Eck Hall of Law at Notre Dame.

The keynote speaker on Friday will be Elijah Anderson, the William K. Lanman Jr. Professor of Sociology and Professor of African American Studies at Yale University. He is a leading urban ethnographer and one of the nation’s most influential scholars in the field of urban inequality.

Professor Anderson’s work – which includes identifying and describing concepts such as the “code of the street” and “cosmopolitan canopies” – has been acclaimed in academic circles while appealing to popular audiences as well.

His talk, titled “Symbolic Racism and the Discrimination that Follows,” is at 12 p.m. in the McCartan Courtroom in Eck Hall of Law.

On Friday afternoon, a team of historians from the Mapping Prejudice Project will present their research into racial restrictions that are buried in historic Minneapolis property deeds.

Racial covenants or racially restrictive deeds were common in American cities before the Fair Housing Act. The Mapping Prejudice researchers are creating the first comprehensive map of such restrictions for an American city. The result is a fascinating look at how a city’s past continues to shape its present.

The panel discussion, titled “Mapping Discrimination,” is at 2 p.m. in 1140 Eck Hall of Law.

The full schedule of Friday’s events is available at law.nd.edu/fairhousing.

Originally published by Kevin Allen at law.nd.edu on April 18, 2018.