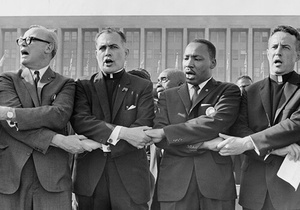 On a morning filled with brilliant sunshine and 70-degree temperatures, University president Rev. John I. Jenkins, C.S.C., joined City of South Bend leaders including Mayor Pete Buttigieg and community members at Leighton Plaza in downtown South Bend. There, a sculpture was unveiled, based on a famous photo showing the late University president Rev. Theodore Hesburgh, C.S.C., holding hands with King during a 1964 civil rights rally in Chicago.

The Wednesday (June 21) march and unveiling ceremony held amid the resplendent beauty of the first day of summer commemorated an event that occurred when the figurative storm clouds of racial inequality darkened the country’s horizon. In remarks at the ceremony, Father Jenkins recalled that many people, if not most whites, viewed King as a controversial figure in his time. And so it was that several prominent figures turned down King’s invitation to attend a rally at Soldier Field in Chicago to promote equality and denounce the murders of civil rights workers in the South.

But when the phone call came to Father Hesburgh as he was working in his office, his response was simple: “What time do you need me?” He drove from South Bend to Chicago on June 21, 1964, to participate. At the end of the rally, he joined hands with King and sang, “We Shall Overcome.” It was during the singing that the famous photograph was taken. The photograph now hangs in the Smithsonian Institution’s National Portrait Gallery.

“We’re all part of a bigger tapestry, and that is what the location of this sculpture on Main Street represents," said Buttigieg.

Recognized as a civil rights champion, Father Hesburgh served as president of Notre Dame from 1952 to 1987, and was a principal architect of the Civil Rights Act. He served on the Civil Rights Commission from its inception in 1957 until 1972. That same year Father Hesburgh was awarded the Presidential Medal of Freedom, the nation’s highest civilian honor, for his visionary work against elements of apartheid in America.

The South Bend sculpture, funded by private donations, was designed by Granger-based artist Tuck Langland. Efforts to find the identity of the photographer from the 1964 rally have proven fruitless. Yet Father Jenkins noted that what was captured in that moment, and memorialized by the sculpture, “should remind us to join hands to build communities of justice, of mutual respect, of love.”

“And when that phone call comes to us and it says, ‘We need you to work for justice, for peace,’ may we simply respond, ‘What time do you need me?’”

Originally published by Andy Fuller at news.nd.edu on June 21, 2017.