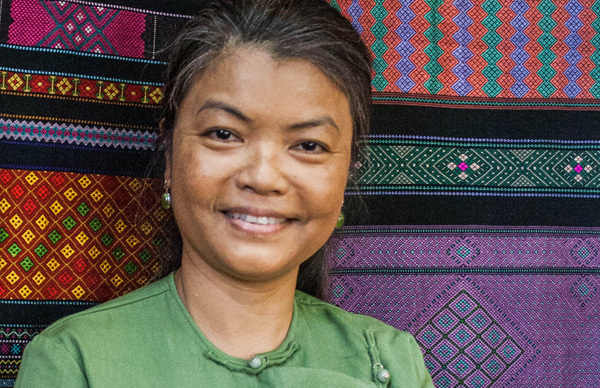 Mai Ni Ni Aung, M.A. 2003, has been selected to receive the Kroc Institute’s 2018 Distinguished Alumni Award. She is the founder of the Sone-Tu Cultural Preservation Project and the director of its sister organization, Sone-Tu Backstrap Weavings. Both organizations work to preserve and elevate the culture and traditions of the Sumtu Chin community in Rakhine State, Myanmar. After commuting back-and-forth from London for several years, Mai Ni Ni is now based in Myanmar.

“My goal since I started the Sone-Tu [project] has been to make people aware of Chin culture and history, while also connecting Chin living in Rakhine with the modern world,” says Mai Ni Ni. “Like the threads of the weavings themselves, making connections between the past and present is what Sone-Tu is trying to do.”

Mai Ni Ni will receive the award and deliver a lecture titled “Weaving Peace in Myanmar: Sustainable Development and Cultural Preservation” at 12:30 p.m. on Mon., April 9, in 1030 Jenkins Nanovic Halls on the University of Notre Dame campus.

Mai Ni Ni’s peacebuilding work has focused on development and education in contexts where ethnic conflict has been a fixture for generations. Myanmar is one of the most ethnically diverse countries in the world, with the government recognizing 135 distinct ethnic groups.

A member of the Sumtu Chin herself, Mai Ni Ni says she founded the organizations out of frustration with the erosion of Chin cultural traditions. In 2002, she was working with a team to document the rituals, customs and history of the Sone-Tu, when she realized that she was unable to find or purchase indigenous Sone-Tu clothing and textiles, famed for their intricate, handwoven patterns.

High poverty rates forced many Sumtu people to sell their handwoven clothing to people beyond the community for income, and cheap, easily mass-produced clothing replaced the finer textiles for everyday wear in the community. Despite international interest in purchasing the textiles, many weavers in the community were forced to take on odd jobs to make ends meet and were living on the brink of poverty. And as traditional clothing vanished from local villages, the art and skill of weaving was not being passed on to younger generations.

Mai Ni Ni paired young women with older “master weavers” from the community, who taught the time-consuming creative process of crafting handwoven textiles featuring traditional Chin patterns. In order to make these efforts sustainable, Mai Ni Ni solicited grant funding and also built a network to sell the textiles to people across Myanmar and around the world who were willing to pay a fair price for the intricate pieces.

Today, Sone-Tu employs 270 weavers, all women, and supports 35-40 students pursuing education each year. Many students must leave their villages in order to attend high school, so some proceeds from the sale of Sone-Tu textiles support the maintenance of a hostel that houses the students and provides them with food, lodging, health care and support.

“Education is critical for the continued development of the Chin people,” says Mai Ni Ni. “In Myanmar, competition for jobs that pay a fair wage is great, and a high school education is essential if students are going to succeed and become future leaders of the Chin community.”

In addition, Mai Ni Ni has played an instrumental role in preserving and documenting 150 traditional patterns from three different Chin sub-groups. The organization received a grant from the National Geographic Society to document the weaving process, and Sone-Tu textiles are on display in prestigious art venues around the world, including Singapore’s Asian Civilization Museum, the Textile Museum in Washington, D.C., and England’s Brighton Museum & Art Gallery.

“Reducing poverty usually means increasing income and material assets, but it also involves providing people with a sense of purpose and providing them more opportunities to reach their goals,” Mai Ni Ni says. “The weavings that Sone-Tu women produce are tangible assets, both culturally and economically, and aspects of culture, both tangible and intangible, have real and intrinsic value and can be one way to reduce poverty and discourage conflict.”

In 2002, just months after starting this project, Mai Ni Ni traveled to the University of Notre Dame to pursue an M.A. in peace studies at the Kroc Institute. She relied on her family in Myanmar to help keep the programs going. In addition, Notre Dame allowed Mai Ni Ni to display and sell weavings at campus events, which helped to elevate the profile of the business. She also won the “Overcoming All Odds” award in the Social Venture Awards Competition from Mendoza School of Business at Notre Dame. Members of Notre Dame’s women’s boxing team were so inspired by Mai Ni Ni’s presentation during the contest that they also donated an additional $3,500 to support her work.

Mai Ni Ni credits her time at the Kroc Institute for equipping her with skills for negotiation and compromise, as well as a sense of “respect for the opinions of others and the importance of listening.” She also notes that learning about how “violence escalates in a given situation,” has been helpful as she seeks to maintain good relationships in Rakhine State, an area in the news recently after outbreaks of violence led to the exodus of over 500,0001 Rohingya civilians. Mai Ni Ni says that so far the Chin people have found a way to co-exist peacefully with all parties engaged in the current conflict.

During her visit to campus, Mai Ni Ni will display and sell Sone-Tu textiles.

Established in 2004, the Kroc Institute’s Distinguished Alumni Award honors graduates of the master’s in peace studies program who have made exemplary contributions toward peacebuilding around the globe. The Kroc Institute for International Peace Studies is an integral part of Notre Dame’s new Keough School of Global Affairs.

About the Kroc Institute: Notre Dame’s Kroc Institute is one of the world’s principal centers for the study of the causes of violent conflict and strategies for sustainable peace. The Kroc Institute offers BA and PhD degrees in peace studies and supports the International Peace Studies concentration of the Keough School Master Of Global Affairs. cultivates cutting edge research and policy work in interdisciplinary peace studies.

1 Firm numbers are hard to come by in the midst of this crisis. Estimates for the numbers of Rohingya civilians who have fled Myanmar range from 400,000 to 600,000.