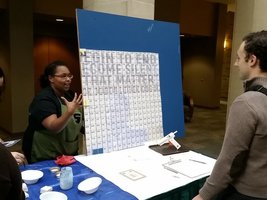 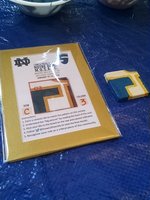 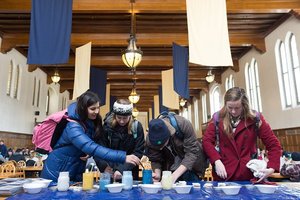 The iconic image is a visible reminder of Notre Dame’s longtime involvement in the dialogue on civil and human rights - from the turbulent civil rights movement of the 1950s and ’60s to today’s efforts to advance justice and human dignity around the world. 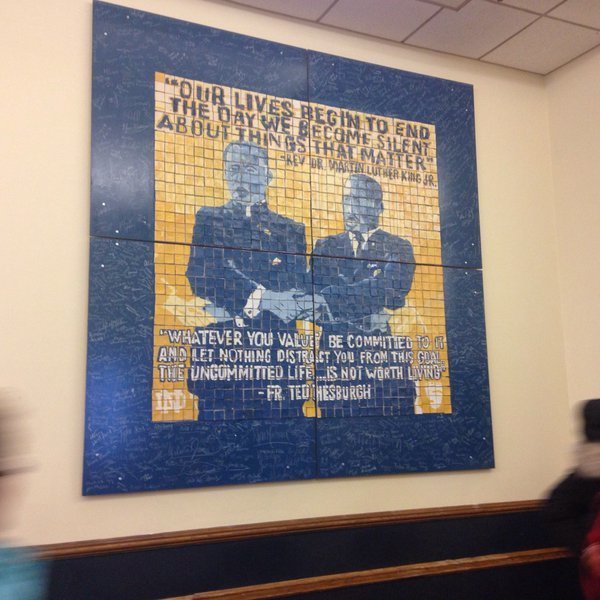 In “The Picture of Purpose,” a story in the Winter 2007-2008 publication of Notre Dame Magazine, author Richard Conklin provides the colorful story behind the black-and-white photograph:

Father Theodore Hesburgh, CSC, answered the phone on the morning of July 21, 1964, a date that would become famous for the murder of three young civil rights workers in Mississippi. Martin Luther King’s crusade had moved north to Chicago, and a massive rally was scheduled in Soldier Field that day. The caller told Hesburgh that Mayor Richard Daley and Cardinal John Cody had turned down invitations. Would Hesburgh, a member of the U.S. Commission on Civil Rights, show the flag for church and state?

Hesburgh’s answer was to drive the 90 miles to Chicago. As he later told the story, he was mingling in the crowd when someone on King’s staff spotted him, and he was hoisted onto the platform. He gave an impromptu endorsement of the milestone Civil Rights Act, which banned segregation in the nation’s schools and public places, and was awaiting President Lyndon Johnson’s signature.

“Be proud to be a Negro,” he told a crowd estimated at 57,000. “We want to strive for dignity with you.” He linked arms with King to sing the movement’s anthem, “We Shall Overcome.” Read the full story.

And now, as the Notre Dame community participates in Walk the Walk Week and reflects on the values central to both King’s legacy and Notre Dame’s mission, a new generation of students, faculty and staff are being asked to answer a new call.

The question: “What’s your next step?” Tweet your response using #NDwalkthewalk.