Prayers for peace, justice and solidarity amid divisive time across the nation

It may come as no surprise that, in times of division and frustration in the United States, members of the Notre Dame community choose to unite in prayer.

In the span of just four days, two prayer vigils were held on campus in response to the police-involved shooting deaths of black men in Louisiana and Minnesota and a sniper attack that killed five Dallas policemen. Students, faculty, staff and community members were invited to attend the both events, which had been scheduled prior to the shooting in Baton Rouge, La., that left three officers dead and three wounded. 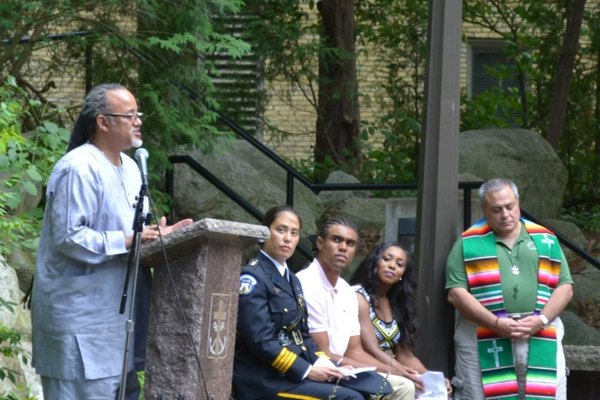 (From left) Eric Love, NDSP Chief Keri Kei Shibata, Corey Robinson, Karrah Miller and Rev. Joseph Corpora, C.S.C., spoke at a Prayer Vigil for Peace on Thursday, July 14, at the Grotto of Our Lady of Lourdes.

“We come here today to pray and spread love. We are not here to take sides or to point fingers. We are not here to espouse hate and perpetuate ignorance,” said Eric Love, director of staff diversity and inclusion, at the Prayer Vigil for Peace on Thursday, July 14. “We are here to pray for peace. We hope that love overcomes hate, that ignorance will be conquered by intelligence and that fear is replaced by understanding.”

The idea of a campus gathering originated during conversations Love had with Karrah Miller, director of the Office of Institutional Equity and Title IX coordinator, and Notre Dame Security Police Chief Keri Kei Shibata. The three were troubled by the violence and anger spreading across the nation and sought to provide an outlet to promote peace, unity and understanding. (Read the prayer offered by Shibata.)

Nearly 90 people turned out for the evening vigil at the Grotto of Our Lady of Lourdes. While those gathered were mostly civilian, there were also Notre Dame and community police officers in attendance as well as firefighters and emergency medical personnel from the University and surrounding areas.

Shibata told the crowd, “As police officers, we, like all people, have good days and bad days. And there have been plenty of both lately. On both the good and bad days, all of us in the Notre Dame community must remember that we all need each other. That we cannot be successful without one other. That we cannot have the kind of community we want to have without every one of us doing our part.”

While those gathered were mostly civilian, there were also Notre Dame and community police officers in attendance as well as firefighters and emergency medical personnel from the University and surrounding areas.

Love, Miller and Shibata partnered with others on campus, including Student Body President Corey Robinson, Student Government, Campus Ministry and Human Resources to pull the event together.

“I challenge all of us, especially those of us who are believers, to block out the divisive noise and do as the Great Book says do. Let us help heal the land through our prayers and loving kindness shown to one another,” Miller stated.

Robinson and Rev. Joseph Corpora, C.S.C., director of university-school partnerships for the Alliance for Catholic Education, offered suggestions for reaching out across differences and working together to achieve peace.

It is possible to be both “pro-black lives and pro-law enforcement,” Robinson noted. “I encourage you to look toward the future and ask, ‘What can I do to love my neighbor?’ instead of asking ‘How has my neighbor wronged me?’” 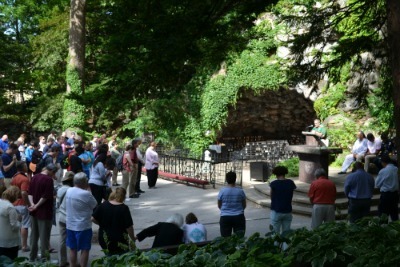 On Sunday, July 17, another vigil was held. The Center for Social Concerns and Multicultural Student Programs and Services (MSPS) hosted a Vigil and March for Justice and Solidarity.

About 70 people took part in the event and marched along Angela Boulevard, between Twyckenham and Notre Dame Avenues.

In an interview with the South Bend Tribune, MSPS director Iris Outlaw recalled the good that her father, a retired police officer, as well as other family and friends in law enforcement have done in their communities. “You don’t label everyone negatively just because of a few bad apples,” she said. “We’ve all got to work through those problems — caused by those bad apples — together, with police.”

Read more about the Vigil and March for Justice and Solidarity at socialconcerns.nd.edu.