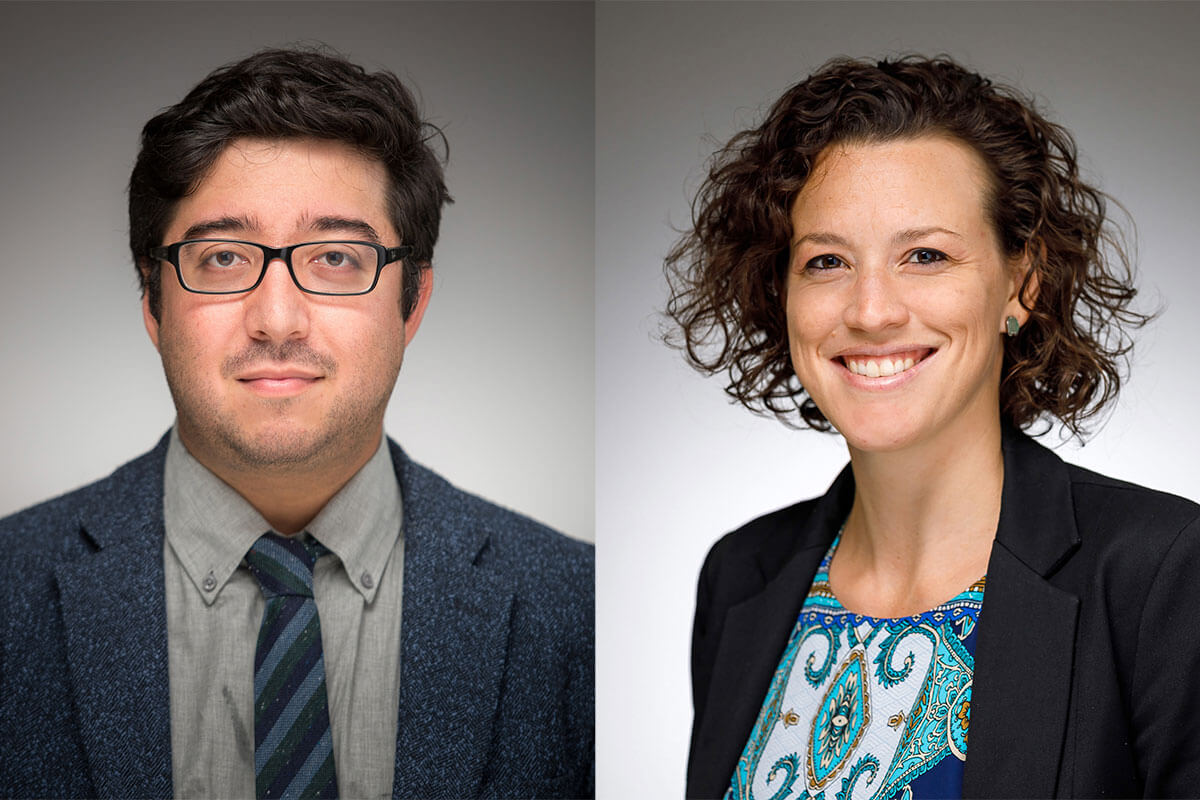 The Department of English’s expertise in global and multicultural literature is broadening with two faculty members, both of whom have close ties to Notre Dame’s Institute for Latino Studies.

Sarah Quesada, who received her Ph.D. at Stanford University, came to Notre Dame in 2017 from a Chancellor’s Postdoctoral Fellowship in Latina/Latino studies at the University of Illinois and an Andrew Mellon grant with the American Council of Learned Societies. Her research and teaching interests include 20th- and 21st-century Latinx and Latin American literatures, Francophone West African literature, decolonial and spatial theory, and heritage tourism of the African diaspora.

Francisco Robles received his Ph.D. at Princeton University and served as a visiting assistant professor of English at Connecticut College before coming to Notre Dame last year. He focuses on multiethnic American literature of the 20th century, particularly African American, Chicanx, Southwestern, postcolonial, and LGBTQ literature.

“Together, Sarah Quesada and Francisco Robles give the English Department an impressive range in the area of Latinx literatures. We have long wanted to extend our scholarship and teaching in this increasingly important area, and I am delighted that we have two energetic and highly accomplished young scholars to help us with the task,” said Jesse Lander, associate professor of English and chair of the department.

“They are also almost perfect complements to one another. Sarah works on questions of transnationalism and African diaspora studies, while Francisco places Latinx literature squarely within the multi-ethnic literary history of the United States. We are lucky to have them both at Notre Dame, and I’m very excited to see the work they’ll do in the years ahead.”

Quesada was drawn to Notre Dame, she said, by the strength of both the English department and ILS — and the opportunity to do interdisciplinary research.

She is currently working on a book project, titled Atlantic Creatures: Textual Memorials of Latinidad, which explores the relevance of Atlantic African historiography to Latinx identity.

“The project envisions what it would look like if we Latinos considered ourselves Atlantic beings — thinking about how the Atlantic world system had an impact on our identity and our literary history,” she said. “There’s always been either this rejection of African history or an uncomfortable position vis-à-vis race or blackness in Latinidad, as well as a general sense that Latinos are somewhat irrelevant to African history or African identity. This is simply not the case.”

For the project, Quesada analyzes how three main periods of African historiography — the era of the slave trade, 19th-century imperialism in West and Central Africa, and the era of decolonization — are embedded in Latino literature and how these texts can function as “memorials” of the Atlantic.

Using her knowledge of French, Portuguese, and Spanish, she has consulted Atlantic archives while also conducting fieldwork in West Africa for the project. At these sites, she identified how fictional tales told at prominent memorials of the UNESCO-sponsored Slave Trade route coincide with the formalist way Latinx literature tells stories about the African diaspora.

“What really interested me about the rise of Atlantic memorialization is the fictional component it can possess. A lot of the stories told at these sites are, in fact, part fiction. Sometimes they’re based on historical fact and sometimes they’re embellished for the benefit of the tourist or the pilgrim,” Quesada said. “I thought, if historical sites are using fiction to convey affect, in what ways might fiction then use memorialization and historical sites for the same means?”

This semester, Quesada is teaching an Introduction to Literary Studies course and The Extraordinary Americas: “Magic” and Reality in 20th- and 21st-Century Latinx and Latin-American Literature, a course directly informed by her research and meant to challenge what seems superficially so foreign but has always been, rather, unopposed colonially rooted dichotomies.

Literature is a “perfect vehicle,” Quesada said, to enable students to empathize with a culture that they, perhaps, have never been exposed to directly or never even thought about as their own.

“When students read these Latinx or Latin American literatures, they not only become aware of the historical impact the United States has had abroad, for example, but the novel or short story also allows them to feel how the characters must feel in those historical circumstances. And that’s what’s so beautiful about what I do — my job is to transport students to these so-called impossible spaces.”

“When students read these Latinx or Latin American literatures, they not only become aware of the historical impact the United States has had abroad, for example, but the novel or short story also allows them to feel how the characters must feel in those historical circumstances,” she said.

“And that’s what’s so beautiful about what I do — my job is to transport students to these so-called impossible spaces.” 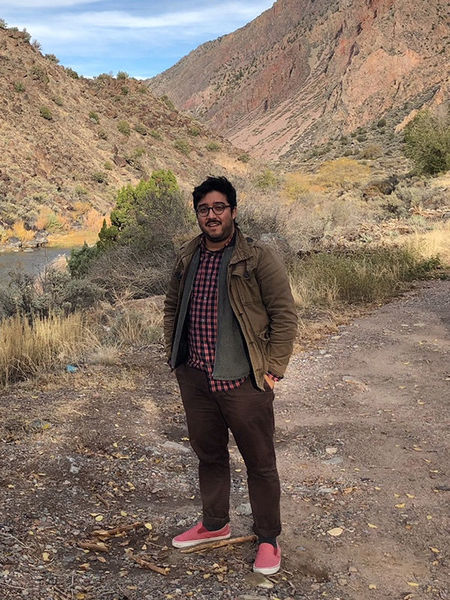 Francisco Robles by the Rio Grande in New Mexico, between Taos Pueblo and Santa Fe

Robles’s current book project, Migrant Modes: Aesthetics on the Move in the Long Popular Front, focuses on migrant workers at significant moments in time — from the period just after the height of the great migration of African Americans in the 1930s, to the Memphis sanitation workers strike in 1968, and beyond.

In particular, he examines how musicians and writers portray the struggles of migrant workers in fields or factories and what strategies they use to try to share those experiences.

Authors like Muriel Rukeyser and Zora Neale Hurston worked to find new ways to represent people who did not have access to the media or publications themselves, he said. For example, they added data sets, letters, field recordings, eyewitness testimony, and interviews to their creative writing, as a way of directly creating a conversation.

“They tried to put the story out there in a new way,’” Robles said. “Rather than speak for people, they tried to figure out how they could give those people who were voiceless a way to speak for themselves.

“It was important then. And it’s important now, because we still have so many people who don’t have the power to speak for themselves. So, how can we look to these examples to see ways in which we can have empowering mediums or modes of representation?”

Robles, a concurrent faculty member in the Gender Studies Program, brings his research to the classroom in classes like American Migrant Communities and a University seminar called On the Move: Migration in American Literature.

“I ask my students to think about how migration actually influences literature and its form — not only what authors write about, but also the very shape of language,” he said. “In American Migrant Communities, we examine Chinese American, Jewish American, and Mexican American literature, among others, and consider why migration is such an important through line in American literary history.”

The University is a natural fit for his research interests, Robles said, with both the English department and ILS offering tremendous support.

“ILS is an incredibly important home for me because so much scholarship around Latinidad is occurring on the issue of migration, whether it’s in political science, sociology, history, theology, or English literature,” he said.

“And all of the faculty members I’ve gotten to know across the University I admire immensely. When I first came to campus last year, I was really struck by the kinds of rigorous, open-ended questions I was getting. Now that I’m here, I continue to value the intellectual atmosphere, and I’m so glad I get to work with my colleagues. ”

Originally published by Carrie Gates at english.nd.edu on December 13, 2018.