Remarks from Interfaith Prayer Service for Respect and Solidarity

Following an acrimonious election season, the University of Notre Dame invited the campus community to take part in an interfaith prayer service to pray for peace for the nation, wisdom for leaders and care for the most vulnerable.

The following is an excerpt of Rev. John I. Jenkins, C.S.C.'s remarks. 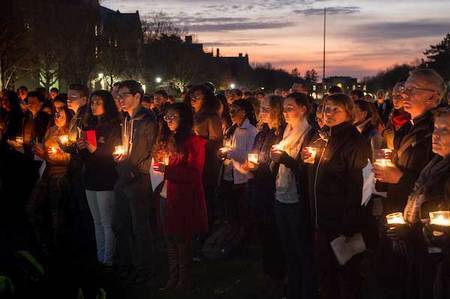 The most remarkable thing about this conversation between Jesus and the Samaritan woman—which is depicted in Ivan Mestrovic’s sculpture behind me--is that it ever happened at all.  As the woman says, she is a Samaritan and he a Jew, so different religiously and culturally, and Jews “do not share things in common with Samaritans.”  Moreover, as recorded later in this chapter, when the disciples return, they are surprised that Jesus is talking to a woman, for it was unacceptable in the time for a man to address in public a woman who was a stranger.  Despite these barriers, Jesus simply asks her for a drink of water, and that opens a conversation about something much more profound.

Though Jesus initially asks her for drink, he suggests she should ask him and he will give water that will take away thirst forever.  In this reading, Jesus crosses chasms of culture, religion and gender, and in the encounter there is a transformation in who gives and who receives, what is given and what is received, and what thirst is quenched. In this exchange, wondrous new possibilities are revealed.

“Everyone who drinks of this water will be thirsty again,” says Jesus, “but those who drink of the water that I will give them will never be thirsty.  The water that I will give will become in them a spring of water gushing up to eternal life.”  In Mestrovic’s sculpture before us, the Samaritan woman and Jesus speak over the well’s pool of water.  It is perhaps in the very exchange, in reaching with compassion and understanding across what divides a Jew and a Samaritan, a woman and a man, that the ordinary water becomes something else—a spring of water gushing up to new possibilities, new hope and to quenching a deeper thirst.  Indeed, welling up to eternal life.

We have come through an election cycle that has revealed and perhaps deepened divisions in our country and in this community as well.  In recent days I have received letters and emails from people on both sides in this election that express anger, uncertainty, bitterness and fear.  It is a troubling time.

We would do well to reflect on this reading and this sculpture in these days.  If we allow our differences to rend the fabric of this community, our University will become an arid, thirsty place.  But if we reach across to engage one another, to give or receive some water, healthy plants can grow.