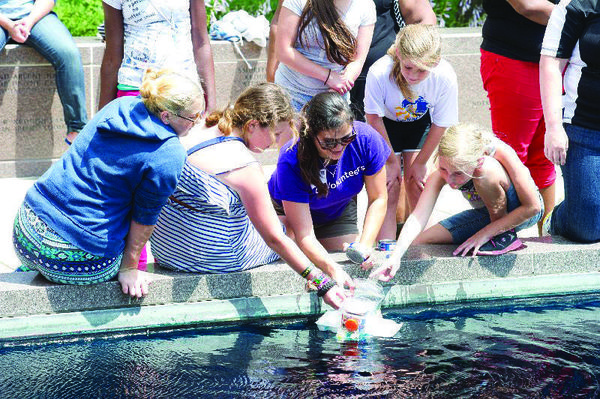 The day camp, which takes place on college campuses around the country, is designed to introduce middle school girls to STEM activities, with the goal of encouraging them to pursue careers in science and technology. The camp has been offered at only eight other schools in the country, including MIT and Georgia Tech. This year, General Electric approached Notre Dame about bringing GE Girls to campus.

With more than 400 Notre Dame alumni in the GE network, hosting the camp at Notre Dame was a “no-brainer,” says Ashley Bartowitz, an alumna and CFM56 product support engineer at GE Aviation. “The Notre Dame Women’s Network was heavily involved out of Chicago. GE Capital’s in Chicago, and we used our Notre Dame alumni network to pull in volunteers.”

The GE volunteers spent the week in Stinson-Remick with 30 girls from Brown, Jefferson and Jackson Intermediate Centers in the South Bend Community School Corp. Every day, the girls spent time touring, creating and learning about various STEM disciplines.

“We wanted to cover every STEM discipline, so we decided to schedule the curriculum by splitting up the days,” says Bartowitz, who was the curriculum coordinator. The five days were divided into civil engineering, programming, circuits, aerospace engineering and chemical engineering tracks.

The girls crafted boats out of foil, egg cartons and plastic containers before taking them to the Clarke Memorial Fountain and Reflecting Pool giving them a test float. They designed and built hovercraft using balloons and old CDs. After touring the engineering design deck, the elementary students built whistles made from materials from a 3-D printer. The week also included a tour of White Field, DIY lip balm and Silly Putty, Alka-Seltzer rockets and LEGO robotics.

Victoria Goodrich, director of the first-year engineering program at Notre Dame who worked with GE and the South Bend schools to coordinate the camp, said the girls loved the LEGO robotics activity. “I was really surprised at how well they received it, just because it’s really challenging,” she says. “It’s initial coding. It’s not easy to jump into that one. That’s something we do with Notre Dame freshmen. The girls jumped on it really quickly. They made the robots dance and respond to the environment, like spin around when they push a button. We ended up extending the time we had for that because they were having so much fun.”

Bartowitz says the girls responded very well to the activities. The students, who had to apply to the camp, were already interested in science before attending, but now “they’re asking more detailed questions about each of the disciplines and really wanting to know how exactly to get involved in doing this later in their lives.”