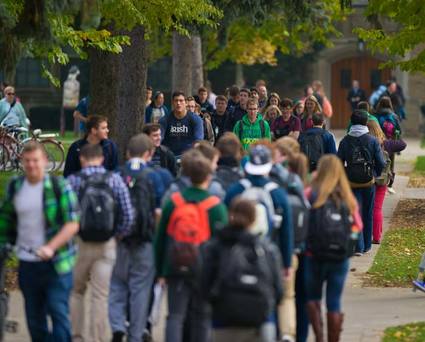 The Division of Student Affairs issued a list of 21 Diversity Recommendations this week, working within the President’s Oversight Committee on Diversity and Inclusion chaired by University President Fr. John Jenkins.

“Our undergraduate seniors tell us that they have a terrific overall undergraduate experience, better than [at] our peer [institutions] which are some of the most selective in the country, and that is a result that you see regardless of ethnicity,” she said. “We’re very proud of that from an institutional standpoint.

“However, we do not stack up as competitively with our peers in any ethnic group for satisfaction with the climate for minorities on campus, according to our students. … But surveys only tell you so much, so I asked Matt Storin to take on a special project this year to really get behind those numbers.”

Storin said the most concerning finding to come out of his research was the indication that many minority students feel like they are the “other” on campus.
“[Minority students] often feel that they are not having the same full, enjoyable experience that they feel the white majority students are having, those who might have been raised in a Notre Dame tradition and always wanted to come here,” he said.

Many white majority students interviewed in the study expressed support for the concept of diversity and an increasingly diverse student body, but said they were not actively engaged with the issue or engaged in getting to know students different from them, Storin said. He said there were “inspirational” exceptions, however, of students in the white majority who felt passionate about improving the situation.

The most optimistic conclusion to emerge from the research was the sense of community built into the Catholic and academic environments at Notre Dame, Storin said.

“The figures show that we could probably make an argument that we have the strongest sense of community of any campus in the country,” he said. “So that’s a good foundation on which to build if we’re going to have programs and initiatives to direct more attention to engagement with people not like ourselves.

“With that and the sense of social justice which is quite evident on this campus … there’s a lot that we can do … I’m pretty optimistic that, eventually, students are going to enter Notre Dame and realize right from the beginning, for those who don’t already, that whether someone looks like the picture of the leprechaun or not, that we’re all Irish and we’re in this one for all in a way that builds on our best traditions.”

Hoffmann Harding said the 21 recommendations from Student Affairs fall into four groups, and responsibility for acting on each recommendation has been assigned to a member of her senior team who will report directly to her.

The first group focuses on internal training within Student Affairs to be ready as a staff to serve a diverse student body, she said. This will include recruitment, retention and development efforts within the Division, with the goal of providing students with role models in the administration who might share their backgrounds and staying attentive to the diversity of the Division staff.

The second group is aimed at students and addresses ways to augment and supplement support the work done by Multicultural Student Programs and Services.

“One of the things I’d highlight that we heard very frequently in Matt’s interviews is orientation,” Hoffmann Harding said. “It’s the first impression of students when they come to campus, and I think it very importantly sets the stage for how we expect to interact with one another and the values that we hold here on campus.”

The third group of recommendations will seek to create a more effective support system for students with high socioeconomic need, including revised advertising, parameters and available resources in the Rector Fund and evaluating the level of support needed for students staying on campus for breaks.
“We need to do a little more benchmarking … to design some programs that will be very intentional and thoughtful about the communication and the services that we provide,” Hoffmann Harding said.

The fourth group will seek ways to demonstrate a visible commitment to diversity on campus with symbolic reminders, facilities and communication strategies.

“[We need] to think about this not just in terms of programs that we do but also in what we say both verbally as a Division … and what we see here on campus,” she said. “I’ve been struck often by how readily apparent it is that Notre Dame is Catholic. We have a crucifix in every classroom. We have the beauty of the Grotto, the beauty of the Basilica.

More immediate goals within this group include having a diversity statement posted in every residence hall by the end of the semester and instituting a new Student Affairs undergraduate leadership award recognizing commitment to diversity and inclusion, beginning this year.

Hoffmann Harding said while the project began with a focus on ethnic diversity and minority student experiences, she hopes the project will engage all students and foster appreciation for each individual’s contributions to campus.

“And I think as a Catholic institution, it is our obligation and responsibility to engage and think about what we can learn from others.”
Storin said the recommendations involve everyone on campus because “if you go through four years here without branching out culturally, it’s a missed opportunity.”

“I think we all understand [that] you cannot shove inclusion down the throats of people. … It has to be an evolving process,” he said. “[We need] conditions in dorms and in freshman orientation that lead people to get together.”

He said the complexity of the issue means that it won’t be solved immediately, but conversation and feedback, particularly from students, will ensure continued progress. Hoffmann Harding said she and her colleagues would remain open to student feedback.

“Any time you put a plan in place, it should not be something that lives on a shelf but should continue to morph and improve,” Hoffmann Harding said. “We have benefitted in putting together these recommendations already from student work — several of the suggestions on here came directly from Diversity Council and student government in a joint resolution that they passed.”

Hoffmann Harding said she and Storin presented the recommendations to the President’s Committee and this set of initiatives is just one dimension of the work done by the different subcommittees.

“This effort is so important to our mission as a University and for all of your experience as students,” she said. “It’s something that we take extraordinarily seriously and that we think really does derive from our mission to have every student feel welcome, to have a great experience here and to feel safe and comfortable coming to us.

“I welcome feedback and conversation on this topic … and we’re going to give it our best to make a positive difference and to create the kind of climate that we all want together.”

This story originally appeared March 20, 2014 in The Observer. Read more about the Division of Student Affairs' Diversity Recommendations here.