The power to lead is the power to transform. Notre Dame is proud to celebrate women whose scholarship and leadership are leaving an indelible imprint on the global community. This is an excerpt from one of six profiles featured on  womenlead.nd.edu. 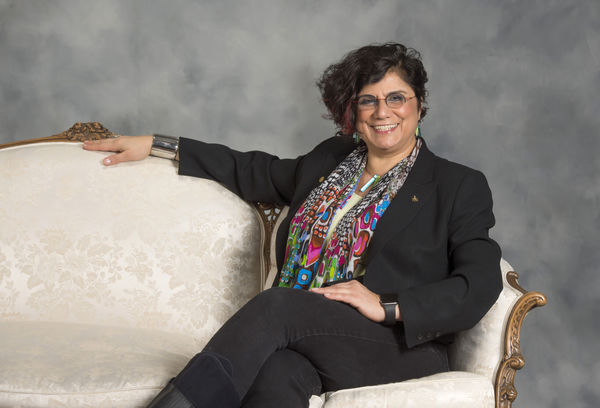 Ani Aprahamian, with her easy laugh and a shock of red dye in her graying black hair, can also cut against the rigid stereotypes of a nuclear physicist. She says her international background helps her notice changing circumstances and understand her far-flung colleagues. She even wanted to be an ambassador as a child because the American ambassador in Lebanon was so impressive.

A high school guidance counselor in Worcester, Mass., helped Aprahamian understand that she would need family connections for such posts. Her parents were a tailor and a seamstress, so her physics teacher who saw her talent in science pointed her in that direction. She was the first in her family to attend high school or beyond.

After earning her doctoral degree and completing a stint at a national laboratory, Aprahamian came to Notre Dame in 1989. The nuclear structure lab, the University’s longest continuously funded research effort, drew her and the commitment of her colleagues made her stay.

She was the only woman in nuclear physics at Notre Dame for 27 years until she helped hire two more last year. She also secured grants for female physicists from the former Soviet Union and collaborates with them and other top female scientists from other countries.

Being a woman in a male-dominated field, she said, can be a precarious advantage. “You get noticed faster, you get a lot more attention for your work,” she says. “It has its adverse side effects too. If you do something wrong, that also gets noticed faster.”

Originally published by Office of Strategic Content at news.nd.edu on March 08, 2016.