1968 Olympian and humanitarian to kick off Staff Diversity Speaker Series 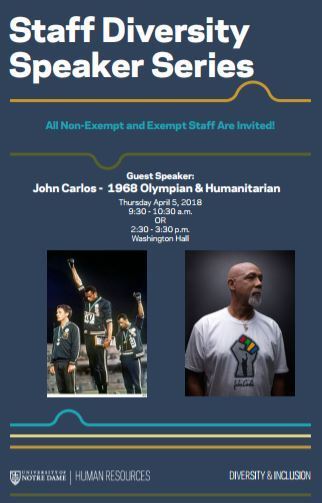 Carlos, who won bronze in the 200-meter sprint, stood on the Olympic podium that night in Mexico City, Mexico, with purpose in his heart. As the U.S. national anthem played, he bowed his head and thrust a gloved fist into the air.

Carlos will talk about life before and after his iconic protest during the inaugural Staff Diversity Speaker Series, presented by the Office of Human Resources and Eric Love, staff director of diversity and inclusion. All Notre Dame non-exempt and exempt staff are invited to attend.

Love is expanding his staff programming efforts, which already include a Diversity Discussions series and the University-wide We Are All ND diversity training workshops.

“This new series is an opportunity for non-exempt and exempt staff to hear first-hand how we, as individuals, can bring awareness to issues of diversity, inclusion and inequity and respectfully challenge our communities, states, nations and the world to treat all people – despite their ethnicity, culture, gender, sexual orientation, religion or other aspect of their being – with dignity and respect,” Love said.

Carlos and teammate Tommie Smith carefully planned their protest back in 1968. Smith, the gold-medal winner in the event, is also captured in the famous photo with his head down and fist raised. They wore black gloves as a show of black unity and strength. They went without shoes and wore black socks to call attention to black poverty. And, in memory of black lynching victims in the United States, Carlos wore beads while Smith donned a scarf.

Both men, along with Australian sprinter Peter Norman who won silver, also wore badges on their jackets supporting the Olympic Project for Human Rights.

The backlash to their protest was swift. The crowd booed Carlos and Smith, who had to leave the stadium immediately afterward. They were banned from the Olympic Village and suspended from the U.S. team. And once they returned home, things didn’t get any better.

Norman, too, faced scrutiny in Australia for wearing the human rights badge, a move that effectively ended his track-and-field career.

“These men knew the risks to what they were doing, but they felt that it was too important to not take a stand,” said Love. “Over time, their brave act has come to be appreciated for advancing racial equality, but at the time it was detrimental to their professional and personal lives.”

While in South Bend, Carlos will also speak to students at an event sponsored by the Wabruda student club and participate in a meet and greet at the Notre Dame Center for Arts & Culture
.