Breaking down walls of racism, classism and sexism 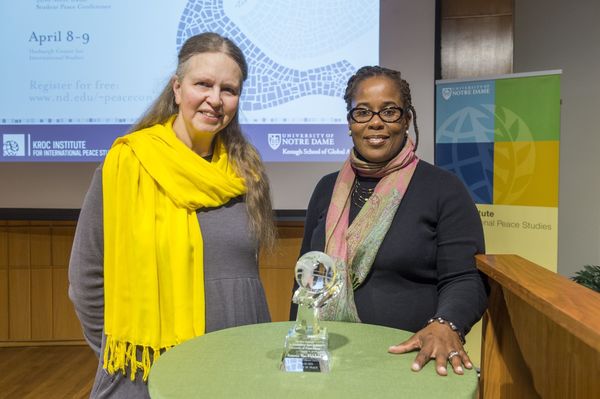 Karsonya Wise Whitehead can be described in many ways. She is an historian, a writer, a public speaker, a professor. She’s a poet and filmmaker. She is a mother, a wife. She is a resident of Baltimore, Md., and she is the daughter of a Baptist minister. But, perhaps most fundamentally, she is an activist — a peace activist.

She seems to naturally incorporate the work of peace activism into every aspect of her life.

“Fifteen years ago, when I realized that someone had chosen me to be their mother, I decided that I was going to call myself a black mommy activist,” she said. “I was going to raise my sons as soldiers in this fight to bring about justice. We would do things like have mock practice trials in the backyard and sit-in movements in the basement as a way of trying to make the [civil rights] movement real to them.”

An associate professor of communication and African and African-American Studies at Loyola University Maryland, she has researched the complex relationships between enslaved and freeborn 19th-century black women and investigated how race, class and gender coalesce in American classrooms, political environments and social arenas.

Whitehead, M.A. ’93, is the 2016 recipient of the Kroc Institute for International Peace Studies Distinguished Alumni Award. The award is given annually to peace studies graduates whose careers and lives exemplify the ideals of international peacebuilding.

Before beginning her academic career, Whitehead worked for 10 years as a documentary filmmaker. Her films include “Life Lessons Learned in Last Place: The Zoe Koplowitz Story,” which features a marathon runner with multiple sclerosis and diabetes and her 31-hour journey to complete the New York City Marathon.

Whitehead was also an award-winning middle school teacher, having taught Advanced Academics Social Studies in Baltimore, Md. In 2006, she was named the Gilder Lehrman “Preserve America” Maryland History Teacher of the Year.

A native of Washington, D.C., Whitehead came to the Kroc Institute in 1992 to bolster her academic background in peace and justice issues. She was the first African-American to enroll in and graduate from the master’s program.

“I believed in peace and considered myself an activist, but I wanted to understand the research on peace issues,” she said. “At Notre Dame I acquired not only a strong academic foundation, but also the encouragement to use my passion to focus on the issues that are important to me.” 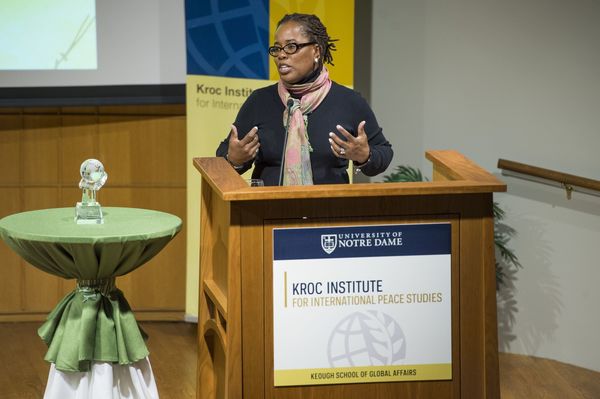 Those issues include breaking down the walls of racism, classism and sexism. And when Trayvon Martin was fatally shot in 2012, Whitehead realized her life would never be the same.

“Trayvon Martin happened, and for us who were on the fringes it woke us up,” the Baltimore resident said. “And so we began to prepare ourselves to get ready for the battle that we knew was coming. I understand the city in which I live. I knew we just hadn’t had our Trayvon Martin yet. My hope was that we could prevent it.”

But she and her sons soon learned that they could not stop what was coming. One month after Trayvon, there was Rekia Boyd. Then Eric Garner, Mike Brown and Tamir Rice. And in April 2015, Freddie Gray died while in the custody of Baltimore police.

Living life as a peace activist

Whitehead describes herself as a child of the civil rights movement. Her minister father marched and worked with others to challenge segregation and secure full legal equality for blacks in the U.S. Whitehead recalls that, as a child, she would sit at the dinner table and ask her dad to recount stories of the struggle as the family ate together.

It was in this retelling of history that Whitehead got her first lesson in what it means to be a student of peace and to live a life of activism.

Her father’s stories were filled with examples of courage and grit, of using one’s unique talents, of making the most of every opportunity, and of faith in action.

These are lessons that she and her husband are passing on to their sons in an age that some have called a “post-racial society,” despite its haunting similarities to the deaths, protests and riots of nearly a half-century ago.

Whitehead, her husband and sons took to the streets of Baltimore after the death of Freddie Gray. They marched for 10 straight days. The atmosphere was sometimes volatile, but they returned day after day.

It was during this time that Whitehead says she understood what Rev. Martin Luther King Jr. meant when he wrote in his Letter from a Birmingham Jail that “All men are caught in an inescapable network of mutuality, tied in a single garment of destiny. Whatever affects one directly, affects all indirectly. I can never be what I ought to be until you are what you ought to be, and you can never be what you ought to be until I am what I ought to be.”

And, although they were marching in and around Freddie Gray’s neighborhood in support of #BlackLivesMatter, Whitehead says she and her family were also standing up for people all around the world who were unable to stand up for themselves. She felt that something was changing, if only in the hearts and minds of her family.

“We were really marching to bear witness to injustice,” said Whitehead. “The suffering in Baltimore is tied to the suffering in Syria. And the struggle to free incarcerated Nobel Peace Prize winners in China is just as important as the struggle to free Mumia [Abu-Jamal.] And the images of college students being pepper-sprayed in Ferguson are just as important and significant as the images of women being sprayed with tear gas in Turkey.

“Injustice anywhere — whether in Florida or Baltimore, Turkey, South Carolina, Sudan or Sandy Hook — is a threat to justice everywhere, a statement that is as true today as it was when Dr. King wrote it [in 1963].” 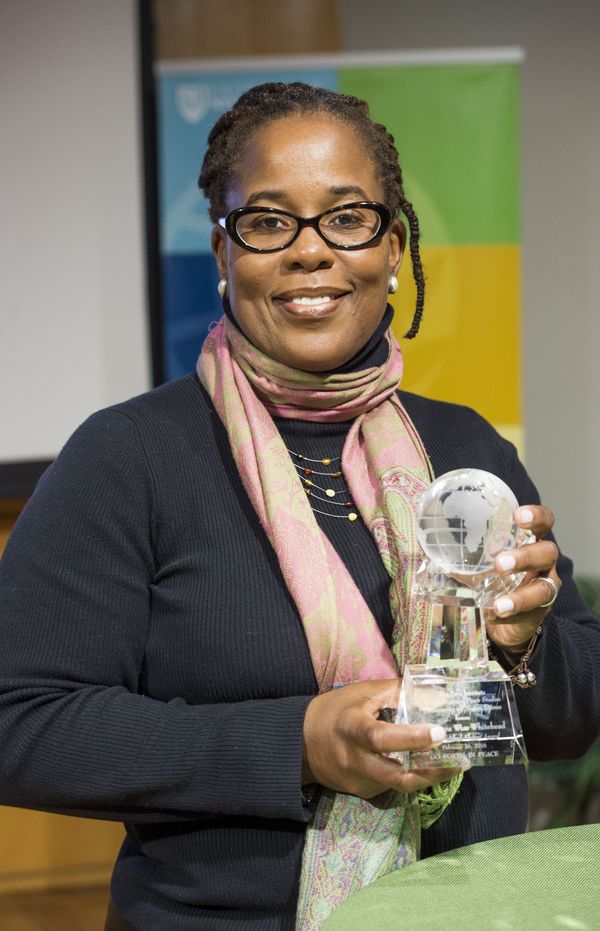 Now that the marches are done, Whitehead, her family and others continue to work to restore a sense of normalcy to the community. The riots that erupted after Gray’s death and destroyed the neighborhood CVS store left residents without a nearby place to buy food and fill prescriptions. So volunteers organized food runs to bring in groceries and medicine runs to go get medication for those who needed it.

Go forth in peace

On the base of the Kroc Institute Distinguished Alumni Award is an inscription: “We are confident you will go forth in peace.”

Whitehead is committed to do just that. And she encourages others to join her in finding ways to put peace studies into real-world application to prevent and resolve conflict that exists in the world, whether on foreign soil or in our own backyards.

Even though it may not be possible for one person to knock down the giants of racism, classism, sexism and other prejudices in one day, she noted that small actions can work together to push society toward a brighter day.

In accepting the Distinguished Alumni Award, Whitehead told a standing-room-only audience at the Hesburgh Center for International Studies:

“Notre Dame family, I challenge you today to see beyond what your eyes can see, to see to that place where, in time, the moral arc has stopped bending and justice and equality are the norm. I challenge you today, in the spirit of peace and equality and justice and a world where all lives can matter and all people can be free and all voices can be heard, that as we collectively push toward the mark of the high calling I challenge you to reach back and grab another hand and pull them along with you. Because I believe that we can get there, we just have to get there together.”

The University of Notre Dame’s Kroc Institute for International Peace Studies is one of the world’s leading centers for the study of the causes of violent conflict and strategies for sustainable peace. Kroc Institute faculty and fellows conduct interdisciplinary research on a wide range of topics related to peace and justice.

Songs in a Key Called Baltimore
by Karsonya Wise Whitehead

“I would like to write a song about peace/about reconciliation/about a city coming back together and working for the common good.

“I would like to proclaim that #BlackLivesMatter and then point to the ways in which this simple concept/screamed and shouted, cried over and prayed about/has transformed the city and altered our space.

“I would like to teach my sons about peace even though I am raising them in a city where peace has never been the norm/where peace is not taught on the playground/nor practiced in the school/nor modeled on the street corner. ...

“All I want is what every other mother wants around this city—the simple comfort of knowing that my sons’ lives matter—to those who look like them and those who don’t/and that my work, to pour love, light, and truth into them, will not be in vain.”