I am ND: Meet Rashied Omar

At the start of his interview with NDWorks, Rashied Omar, a research scholar of Islamic studies and peacebuilding, mentions he has been up since 5 a.m.

“I’ve already run 10 kilometers (6 miles) at the gym and read my pre-dawn prayers,” he shares.

The discipline to rise in the prime of the morning and get the most out of the day is significant to Rashied’s life story, which began in Cape Town, South Africa, in 1959.

As a young child, he demonstrated a talent to recite the Islamic holy book, the Quran, in Arabic. “I’m sure you’ve heard the call to prayer. The recitation of the Quran with the correct pronunciation and in beautiful rhythmic tones is part of the Muslim religious practice,” he explains

The young Rashied approached his father about pursuing Quranic studies at the local madrasa, a Muslim religious school.

“The teacher at the madrasa suggested I attend part time instead of full time. So, I went to the public, secular school during the day and to the madrasa in the afternoons and on weekends,” he recalls. “It was like holding down two jobs.”

Rashied says that was the start of a life “living in two worlds.”

“My lifelong project has been to build bridges between the traditional world of Islam and that of Western secular modernity,” he says. “One of the challenges of our times is finding a balance between holding on to great faith traditions, which have been bequeathed to us over so many centuries, and living at the cutting edge of changing societies." 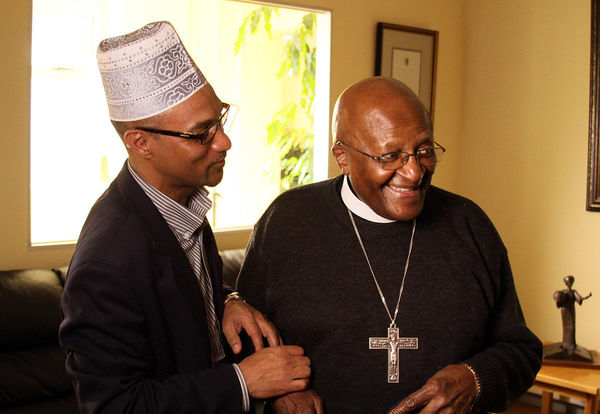 Rashied came to Notre Dame in 2000 as a graduate student in the international peace studies program. He was subsequently employed to coordinate a research program in religion, conflict and peacebuilding and to teach at Notre Dame’s Kroc Institute for International Peace Studies. He obtained his doctorate in religious studies from the University of Cape Town in 2005.

Each spring, he teaches the popular course Islamic Ethics of War and Peace. He returns to Cape Town during the summer and fall, where he advises two to three Notre Dame peace studies students who conduct research and strengthen their peacebuilding practice.

“The students look at the post-apartheid peacebuilding process in South Africa by situating themselves in nongovernmental organizations that are doing reconciliation and peacebuilding work,” Rashied explains.

Apartheid, which institutionalized existing racial segregation in South Africa, ended in 1994. Nearly 30 years later, the country is still in the painful process of healing from the scourge of racism and the huge economic disparities wrought by the oppressive system of apartheid.

The students look for best practices and lessons learned to include in a capstone project they produce during the next spring semester. The data often include interviews with the people of Cape Town, including those the students may befriend on public transit during the daily commute to the NGO.

“The person they talk to may work in the garment industry or is a domestic worker,” Rashied explains. “And so, students have the opportunity to get the perspectives about what’s happening not just from the viewpoint of the elites, but from the people on the ground. This provides them with a valuable perspective from those living on the margins of society, which humanizes their research.”

Humanization is the key to peacebuilding, says Rashied.

He recalls the Rev. Theodore Hesburgh, C.S.C., the late president of Notre Dame and the founder of the Kroc Institute, as saying, “Justice is the work of peace and peace is the work of justice. The other moral value is compassion.” 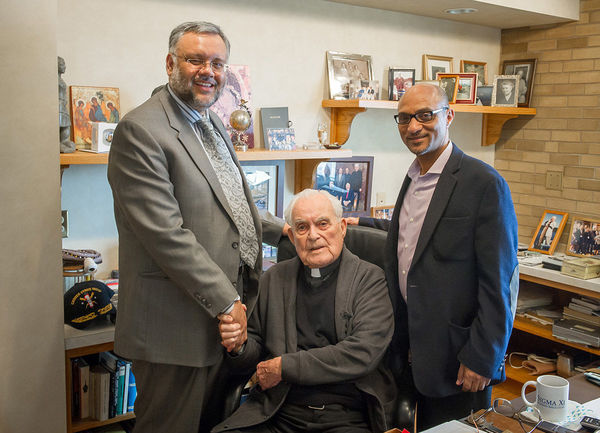 In this 2014 photo, professor Rashied Omar, right, and Ebrahim Rasool, then the South African ambassador to the U.S., left, meet with Rev. Theodore Hesburgh, C.S.C., in Hesburgh’s office. “Father Hesburgh used to say, ‘Rashied, I want the University of Notre Dame to be a place where Muslims feel welcome and a place where we can make some impact in helping the Muslim community reach the highest levels they can.’”

In this 2014 photo, professor Rashied Omar, right, and Ebrahim Rasool, then the South African ambassador to the U.S., left, meet with Rev. Theodore Hesburgh, C.S.C., in Hesburgh’s office. “Father Hesburgh used to say, ‘Rashied, I want the University of Notre Dame to be a place where Muslims feel welcome and a place where we can make some impact in helping the Muslim community reach the highest levels they can.’”

As a peace studies scholar from a Muslim theological perspective, Rashied believes peace has to operate from the ethos of compassion. Compassion is achieved when one sees those affected by an injustice as human beings. “That’s when you reach restorative justice, a merciful justice,” he says.

Religious leaders are often the conveyors of compassionate justice. For example, Archbishop Desmond Tutu spoke out against apartheid. The Rev. Martin Luther King Jr. led the movement for civil rights, and Pope Francis calls on the world to acknowledge the urgency of environmental justice.

“What is needed in the turbulent times in which we live in is to rehumanize ourselves,” Rashied advises.

In addition to his scholarly work, Rashied is an officiating imam of one of the oldest mosque congregations in Cape Town and therefore feels a synergy with the many scholarly priests at Notre Dame.

“What I found at the University of Notre Dame were Catholic priests who came from a different faith but were on a similar journey to mine, to bring their faith traditions into critical dialogue with modernity and postmodernity in terms of the issues and a changing reality."

They too, live in two worlds and are seeking to build bridges of understanding and conflict transformation.

Originally published by Gwen O’Brien, NDWorks at ndworks.nd.edu on September 30, 2019.