In her recently published book, “Days of Awe: Reimagining Jewishness in Solidarity with Palestinians” (University of Chicago Press, 2019), Atalia Omer traces the development of American Jewish solidarity with Palestinians and the diverse social movements that have shaped this advocacy. She also explores the implications of this developing solidarity for Jewish tradition and identity now and into the future.

Omer, associate professor of religion, conflict and peace studies at the University of Notre Dame’s Kroc Institute for International Peace Studies, part of the Keough School of Global Affairs, began research for this book in 2013. She found Chicago to be an “epicenter of Jewish community organizing and justice work” and a space to ground her research, although she conducted interviews with Jews from across the U.S., both in person and online. She also interviewed non-Jewish Palestinian solidarity activists from in and beyond the U.S.

To frame the book, Omer chose a title referencing Jewish High Holy Days. The 10 days starting with Rosh Hashanah are commonly known as the Days of Awe, and are meant as a liminal space and time of introspection on sin, both individual and collective, prior to repentance on Yom Kippur.

“The title intends to capture a sense of grappling with sin and uncertainty undertaken by the activists I interviewed,” said Omer. “For many Jewish individuals, the Days of Awe are about disrupting the binaries that form and shape their lives and taking responsibility for their role in creating them.” 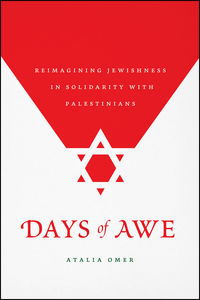 Omer focused particularly on American Jews because of the intertwined foreign policy relationship between the U.S. and Israel. In the book, she explores the interconnections between anti-Semitism and other forms of oppression, and seeks to add complexity to the argument that social movements that critique the Israeli occupation of the West Bank are inherently anti-Semitic.

“In the U.S. we are very clearly facing rising anti-Semitism, but we are also seeing a growing realization of the interconnections between struggles for justice,” said Omer. “For instance, although we should not equate them, there are similarities at the core of our resistance to anti-blackness, Islamophobia and anti-Semitism.”

Omer suggests that as American Jews participate in other activism — including anti-military, anti-racist and anti-classist movements — it has become easier to understand the Palestinian struggle as part of these intersectional social movements for justice. This awakening is also leading many American Jews to reevaluate Zionist discourse and, with it, their Jewish identity.

“Many American Jews are in a process of unlearning Zionist narratives that they were incubated in,” Omer said. “They are grappling with the occupation and how it reflects on them, because it’s done in their name. They can’t stop being Jewish, so they must refigure what it means to be Jewish if they choose to protest the Israeli occupation.”

Omer hopes this book will be helpful not only to readers interested in Israel-Palestine, but also to peace studies and religious studies scholars more broadly as an encouragement to prioritize research and practice on physical violence as well as violence embedded in knowledge and belief systems.

“If you move from a narrow definition of violence as only direct violence and engage with structural, cultural, discursive and epistemic violence, then the analytic space can be expanded and can still include implications for policy,” said Omer. “For peace studies scholars, it will be important to ask to what degree traditional peace studies research has reinforced global structural violence.”

Omer also wrote the book with the goal of emphasizing the importance of how stories and narratives are told and by whom, and how those narratives can shape individuals and movements.

“I’m arguing that we must take stories very seriously in peace studies,” Omer said. “This book explores one strong example of how orientalism, Islamophobia, and the particular ways of remembering and drawing lessons from the Holocaust genocide have all also been a part of inflicting and legitimizing further violence. If we miss studying that narrative and discursive space, our analysis is diminished.”

“Days of Awe” was published in May by the University of Chicago Press. The Kroc Institute will host a book launch and reception at 4:00 p.m. on Tuesday, September 10 at the Hesburgh Center for International Studies. Shaul Magid, distinguished fellow in Jewish studies at Dartmouth College, will offer commentary during the event.