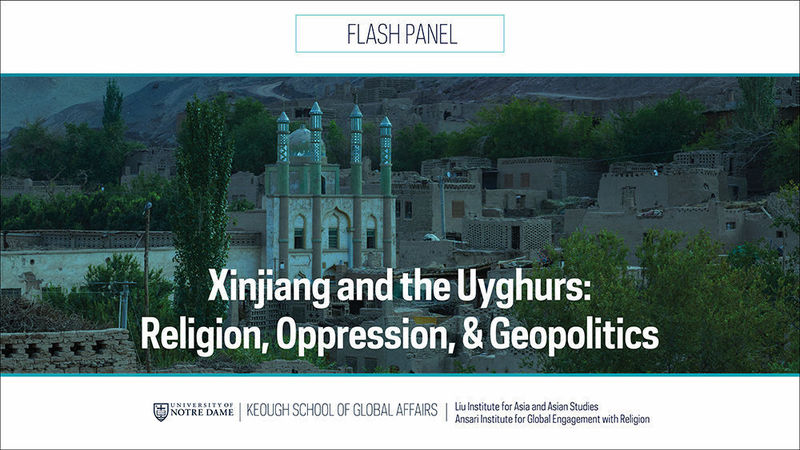 The Liu Institute for Asia and Asian Studies hosted an engaging panel Monday with experts from institutes around the world entitled “Xinjiang and the Uyghurs: Religion, Oppression and Geopolitics.” The discussion focused on the genocide and forced labor of the Uyghur population in Xinjiang and around China, and what the world needs to do to take on the human rights violations.

The event started off with Mahan Mirza, the executive director of the Ansari Institute for Global Engagement with Religion and Liu Institute faculty fellow, who was the moderator for the event. Each of the panelists spoke for about ten minutes about Uyghur minorities and the current crisis.

The first panelist to speak was Rachel Harris, a professor of ethnomusicology at SOAS University of London.

Harris began by talking about her nearly 20 years of travel to the Xinjiang Uyghur autonomous region. She explained how the area has always been under tight control, and she’s been afraid of the police and bureaucracy. Over the past couple of years, however, Harris has felt the situation becoming even more extreme. She talked about the genocides and forced labor the Uyghur people have gone through.

“We need to keep raising awareness and putting pressure on international organizations to respond to this issue,” Harris said. “And we’ve seen enough alarming reports on the drastic birth control policies, and the uprooting of communities that this is a deliberate policy of erasing Uyghur culture and identity. … These are human rights abuses on a massive scale.”

Harris then went on to focus on the idea of culture and cultural heritage, specifically within the context of the cultural genocide and massive destruction of the Uyghurs’ heritage by the Chinese government. Speaking specifically of the Autumn festival, a large event and religious tradition that would happen every year in which the Uyghurs pray to the saints, Harris said this festival was bulldozed and closed down by the Chinese government and labeled as a “terrorist gathering.”

“It’s interesting to reflect on why exactly they would do that,” Harris said. “Why they would go to the trouble of bringing these bulldozers deep into the desert to knock over this brick building? And really, the only answer I can think of, is that they want to cut off from the culture and erase all traces of their history from the landscape.”

James Millward, the second panelist, is a professor of intersocietal history at the Walsh School of Foreign Service at Georgetown University. Millward spoke about the prison camps, re-education camps, sterilization and forced labor by the Chinese government placed on the Uyghur Muslims. He also discussed the interplay between the Chinese Communist Party and the United States government.

The third panelist, Perin Gürel, associate professor of American studies at the University of Notre Dame, discussed international responses to the Uyghur crisis, focusing on the Islamic world and Turkey in particular.

She said Turkey has been the only Islamic country to eventually speak out, which speaks a great deal to the implications of human rights and politics, and the constructed nature of state identities.

“All in all, I think it behooves us to examine which states are being called to condemn the actions of which states, and why, and by whom instead of assuming a normative Muslim unity, it is helpful to see the mobilizations, and limits of this concept,” Gürel said.

The panel then moved to a question period, where the panelists were asked what college students can do to help the Uyghurs.

Gürel spoke about the concept of fake news and polarized political bubbles.

“I think maybe one step is being aware of the warping of reality” Gürel said. “Everywhere, including in the United States and including places we might think reality thrives like places of higher education.”

Harris said that because of how often disheartening news comes out of the region, it is tempting to be pessimistic.

“Still, I think that’s not a reason to stop speaking out right and stop educating,“ Harris said. “There are always ways to put on pressure and all pressure has to be good.”

The panel concluded with Millward discussing the effect college students can have as consumers on producer choices, from avoiding shopping at stores and buying brands that use Uyghur labor to not watching the new live action film “Mulan” on Disney Plus, as the film thanked organizations within the Chinese government that are oppressing the Uyghurs.

Originally published by The Observer at asia.nd.edu on September 15, 2020.