Building a community of genuine love and respect The following is a transcript of University of Notre Dame President Rev. John I. Jenkins, C.S.C.’s remarks at the University’s Martin Luther King Jr. Day Celebration Luncheon on Monday (Jan. 18). Watch the video.

I once heard the story of a preacher who gave a sermon on the sinfulness of our fallen human nature. As his sermon reached its crescendo, he posed the rhetorical question, “Does anyone among us claim to have come even close to the perfection of Our Lord Jesus Christ? Indeed,” he continued, “does anyone even know of a person who has approached this level of perfection?” As he paused, he looked up, and he saw a hand go up in the back of the church.

A bit nonplussed, the preacher recovered himself and said, “I see that someone thinks they know a person who is almost Christ-like in his perfection. Pray, sir, stand up and tell us who this truly remarkable person is.”

The whole congregation turned their heads and sat silently as a man in the back of the church sheepishly stood up to respond.

“Yes, preacher, I believe I know of such a person. It is the man my mother-in-law wished her daughter had married.”

None of us is perfect, and our imperfection is put in bold relief when compared to an imagined ideal.

When it comes to issues we reflect on today, each of us is indeed imperfect, and collectively our Notre Dame community, our city, our nation and our world are far from perfect. Today, 87 years after the birth of Martin Luther King Jr., and a half-century after his assassination — and despite the civil rights advances since then — we are still a very long way from the perfect racial harmony he and his companions sought.

There is no question that great strides have been achieved through civil rights legislation central to the King legacy; strides that crossed borders and even oceans in ways that Dr. King could not have anticipated, and sadly, would not live to witness.

People suppressed because of their race or their ethnicity or their religion in distant parts of a turbulent world — from South Africa to Northern Ireland — found inspiration in Dr. King.

Today, 87 years after the birth of Martin Luther King Jr., and a half-century after his assassination — and despite the civil rights advances since then — we are still a very long way from the perfect racial harmony he and his companions sought.

Looking back on her own experience, the formidable Irish civil rights activist Bernadette Devlin said:

“In 1968, I was 19 years old. I was not a revolutionary or socialist then. I was not even a militant. I was a young Catholic student who simply wanted equality before the law and equality within the system.

In his acceptance speech on winning the Nobel Prize, Nelson Mandela, who had never met Dr. King, nonetheless quoted from King’s own Nobel acceptance speech from three decades earlier, when he said that humanity can no longer be “tragically bound to the starless midnight of racism and war.”

Dr. King accomplished much and inspired many, yet the enemy he battled has not been vanquished. For the roots of racism, bigotry and the kinds of exclusion he stood against go beyond the circumstances of the particular history of a particular nation at a particular time. The tap root of these evils is the tendencies in all our hearts to identify a group with which we are comfortable, celebrate its virtues and remain blind to its shortcomings, and, most insidiously, to cast those different in race, religion, ethnicity, geographic region or anything else as somehow other, not members of our community, not worthy of inclusion — indeed, as a threat. These dark tendencies transcend people, time and place. And it is these tendencies in our hearts, individually and collectively, that we stand against this day.

Part of the battle against such tendencies is indeed about law, regulations or policy that encourages some behavior and punishes other. King recognized both the limitations and the important reach of the law. He said, “It may be true that the law cannot make a man love me, but it can stop him from lynching me, and I think that’s pretty important.”

But it would be naïve to conclude that the de jure protections against discrimination in housing, employment and other important aspects of American life that grew from Dr. King and the civil rights movement had — de facto — eliminated bigotry in all its forms.

And yet, Dr. King was right: The law is important, even if it does not have power to infuse the heart with love. 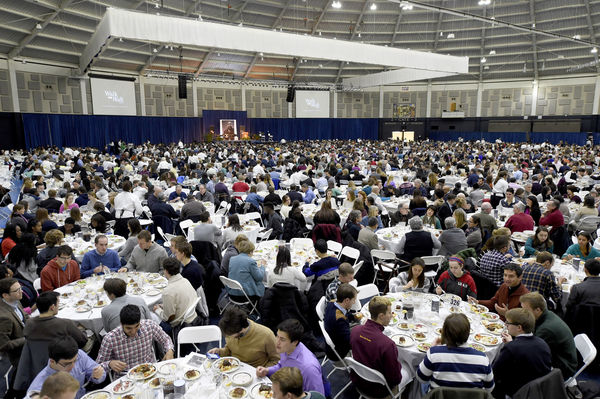 At Notre Dame, however, we cannot be satisfied with waging the battle on the front of law and regulations alone. We strive not simply for just laws, but also, by God’s grace, hearts formed in the justice of God. As a Catholic university inspired by Christ, our struggle is to wage war on the tendencies toward exclusion and derision in each of our hearts and to build a community of genuine love and respect for every member.

Any lesser goal would neither be worthy of Martin Luther King nor Notre Dame.

Many might, with a condescending smile, dismiss such an aspiration as quaintly naïve. But Dr. King did not. He did not because he was a man of faith, and his hope was anchored in that faith. As King said, “the God whom we worship is not a weak and incompetent God … The ringing testimony of the Christian faith is that God is able.”

God is indeed able, if we open our hearts to His power. And so here today, even as we recognize our own shortcomings, let us pray for open hearts and dare to say that our goal at Notre Dame is to follow Dr. King’s call to build an inclusive community sustained not simply by tolerance, but by love. For it is love that can change the darker tendencies in our hearts and in those around us.

There is a reason, Dr. King pointed out, that Jesus said, “Love your enemies” — it changes their hearts as well as our own. As Dr. King put it: “Love has within it a redemptive power. And there is a power there that eventually transforms individuals.”

Ironically, for all the terrible struggles and astounding accomplishments of Dr. King and his companions in changing segregationist laws or customs, that may have been the easier task. In that case the evil was so clear and the goal well defined. Yet the obstacles to building a community of love and respect are usually not as overt as that. They are often comments in passing or casual actions that, even unintentionally, demean others and tear the bonds of our community. Perhaps an important first step is simply a commitment by each one of us to listen well and with empathy, to speak gently but honestly, so that what we say and do in our day-to-day lives builds the kind of community we want rather than undermines it.

As a Catholic university inspired by Christ, our struggle is to wage war on the tendencies toward exclusion and derision in each of our hearts and to build a community of genuine love and respect for every member.

We will continue to strive to recruit a diverse student body, faculty and staff. Yet the mere gathering of a diverse group has no value unless the group is a community in which the gifts of each individual enrich the lives of every individual. Our goal is to be not simply a collection of talented, good, dedicated individuals from diverse backgrounds; our goal is come together in a community characterized by mutual love and respect.

We are proud of the progress that has been made, but we have much more work to do.

Last night we planned a march to begin this commemoration, though it had to be shortened because of the cold to a march to and from the Main Building. Even a short march recalls the many famous marches Dr. King led in his life time — from Selma to Montgomery, Alabama; to the Lincoln Memorial in Washington, D.C. Marches suggest a journey of purpose we take together. That is an image we should keep in mind. For the success we seek is not a destination, but a journey we must travel together. Let each member of this community commit ourselves to walking the walk on that journey. And, as Dr. King said, “If you can’t walk, then crawl. But whatever you do, you have to keep moving forward.”

And so, my friends, let’s march together. Let’s each of us commit to walking the walk. Inspired by Dr. King, we invoke the power of God, the strength of Christ and the intercession of Notre Dame, Our Lady, as we walk the walk of this journey. Let’s keep moving forward.

Originally published by Notre Dame News at news.nd.edu on January 18, 2016.